Hogan's Beach Shop is moving due to Skyplex, but it's getting a massive new home next to Mango's 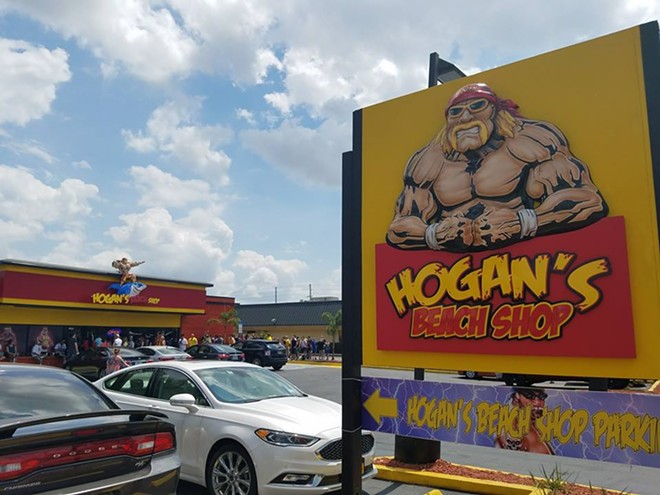 Hogan’s Beach Shop made a huge splash in Orlando when it opened late last month. Lines of eager fans, many in town for WrestleMania, wrapped around the building, each willing to pay upwards of $100 just to get Hulk Hogan’s autograph.

The shop, filled with a mix of beachwear, retro Hulk merchandise, and wrestling collectibles has quickly become a must-do for many visitors to International Drive. A full summer schedule of appearances from famous wrestlers and celebrity friends of Hogan’s is in the works, but with Skyplex planning a groundbreaking by the end of the year, the former 7-Eleven that currently houses the beach shop is scheduled to be demolished sooner than later.

Hulkamaniacs won’t be disappointed by the closure of this location though because an even more grand store is being planned just across the intersection. Joshua Wallack, the developer of Skyplex and Mango’s, revealed new information on the future plans of Hogan’s Beach Shop in a recent interview with the Orlando Tourism Report. Wallack says they opened the temporary location instead of holding out for the much larger one at the Hollywood Plaza. The decision to open in the temporary location did pay off despite the hard work it took to get there.

The new shop will be taking over one-half of the bottom floor of the new Hollywood Plaza entertainment complex currently under construction beside Wallack’s Mango’s Orlando nightclub. Wallack explains that originally the Hollywood Plaza location was going to be a surprise, but the secret soon got out.

"We were keeping that one close to the chest, but everyone knows that the 7-Eleven is part of the Skyplex. That land is dedicated to Skyplex, said Wallack to Orlando Tourism Report. "The idea was to get the beach shop open for WrestleMania 33 so that all the fan base and WWE fans would be able to come and see him."

Clocking in at roughly 4,000 sq. ft. the new store will nearly double the capacity of the current location. It will take over just under half of the bottom floor retail in the garage. The other side will be a bit larger at 5,300 sq. ft. A unique design that includes a large structural wall between the two shops means the spaces will see no columns within them. That, mixed with the 18 ft. tall ceilings, will make this new location a vast improvement over the converted 7-Eleven hat now houses the beach shop.

Out front of the new store will be a Lincoln Road style park with seating, fountains, sculptures and entertainment. Inside the shop expect to see even more wax figures, memorabilia, and unique features.

Some have wondered why you might open a surf shop in Florida’s largest landlocked city, well a massive multi-million dollar surf park is also planned as part of the Skyplex entertainment complex. Originally it was designed to be part of the hotel amenities deck on top of the parking garage. The hotel on top of the garage idea has since been scrapped due to budget concerns.

The space where the hotel was going to go will now be dedicated to parking.
Skyplex is still roughly three to four years away from fully opening, but for now, we have the 12-story Hollywood Plaza garage. That building recently topped out and should be entirely erected by June. The garage portion with its 900 spaces should open by the winter holiday season.

Build out for Hogan’s new Beach Shop and the rooftop Circo restaurant, with its $5 million build-out and retractable glass roof, will still take months of work after the garage itself opens, but we should expect to see a brand new Hogan’s Beach Shop and Circo’s sometime in 2018.