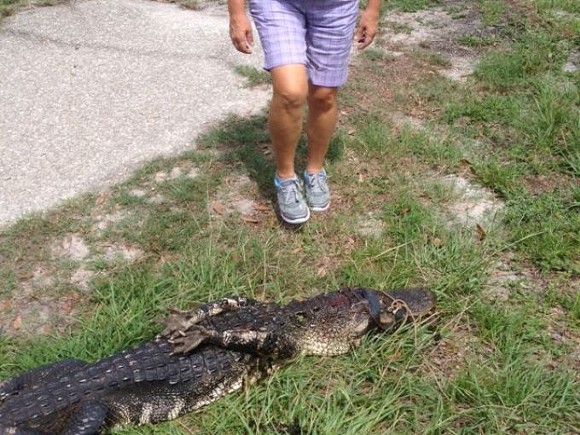 A Florida woman was surprised and saddened to discover that an alligator she asked to be relocated, but not before putting bunny ears on it for a photo, is now most certainly dead.

Last weekend, a Royal Palm Beach resident called a local trapper after a 5-foot-long gator was getting too close to her property during an Easter egg hunt, reports the Palm Beach Post.

Before the trapper could "relocate" the gator, the woman put a pair of bunny ears on the the doomed reptile and snapped a cute photo. Happy Easter! The only problem is, the woman wasn't aware that here in Florida the word "relocate" actually means "super dead," at least when it comes to gators.

Florida trappers don't work for the FWC, and typically they get to keep the  "nuisance alligator" for hide and meat. That's the trade off. So, more often than not, these gators aren't being relocated to a swamp, they're being relocated to some restaurant's deep fryer.

Not to mention the Florida Fish and Wildlife Conservation Commission doesn't want trappers moving large gators around, mostly because this usually causes more problems when they try to meander back to where ever they were removed from.

According to the FWC's Statewide Nuisance Alligator Programs (or SNAP), a gator is considered a nuisance when it's at least four feet in length and is believed to pose a threat to people, pets or property.

Relocated alligators often try to return to their capture site. They can create problems for people or other alligators along the way. If an alligator successfully returns, capturing it again would be necessary and likely more difficult the second time.

To avoid creating a problem at the release site, nuisance alligators would need to be relocated to remote areas where they would not encounter people. These remote areas already have healthy alligator populations, and the ones that already live there have established social structures. The introduction of a new alligator to these areas would likely cause fighting, possibly resulting in the death of a resident alligator or the introduced alligator.