New report finds anti-Semitic incidents on the rise in Florida 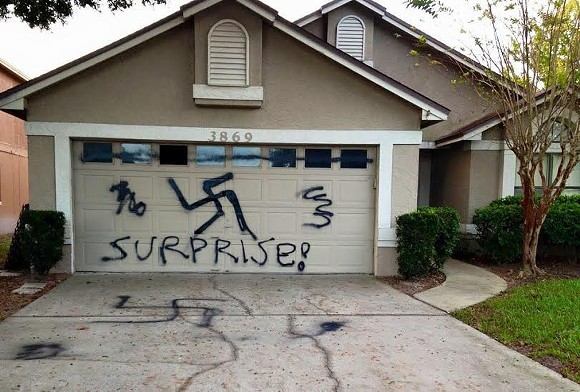 Anti-Semitic incidents in the U.S. surged last year and one of the most massive increases occurred in the Sunshine State.

According to its annual Audit of Anti-Semitic Incidents, the Anti-Defamation League found that there were 137 verified incidents of anti-Semitism in Florida in 2016, an increase over the previous year’s 91.

Incidents of harassment nearly doubled in the state, rising from 61 to 119.

In just the first quarter of 2017, there have already been 41 incidents statewide, including seven incidents of vandalism and 34 incidents of harassment.

These numbers in Florida reflect the growing rise throughout the country, with a total of 1,266 acts targeting Jews and Jewish institutions reported nationwide.

In Florida, the counties with the highest number of reported incidents in 2016 were Palm Beach with 42, and Miami-Dade and Broward, each with 26.

But anti-Semitism has increased in Central Florida, as well.

After Donald Trump's election, 37 hate incidents were reported in the state.

In January, two bomb threats were called in to local Jewish centers and a man wearing a Nazi armband appeared at a Jewish student event at the University of Florida.

“There is no doubt that anti-Semitism is still deeply embedded in our society. The increase in its manifestations is sobering, and should alarm us all,” Yael Hershfield, ADL Florida Interim Regional Director, said in a statement. “This year’s audit is a painful reminder that anti-Semitism still poses a threat.