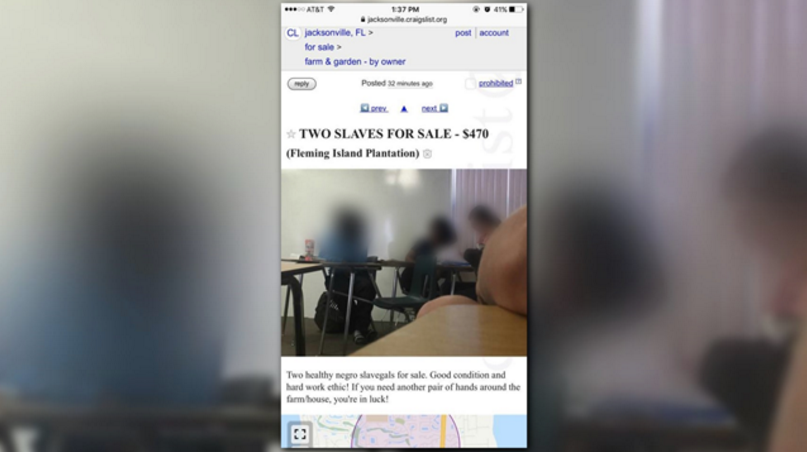 In a horrible display of racism, one Florida high school student has been suspended after posting an ad online calling two of his black classmates "slaves."

According to WJXT, the school district has confirmed that a senior who
attends Fleming Island High School in Clay County near Jacksonville, posted a Craigslist advertisement that offered "Two Slaves for Sale-$470."

The ad was geotagged to Fleming Island Plantation with a caption that read: "Two healthy negro slavegals for sale. Good condition and hard work ethic! If you need another pair of hands around the farm/house, you're in luck!"

The ad has since been taken down off the website, and the student, who hasn't been named because he's a minor, has been suspended for 10 days.

The principal has also recommended that the student be transferred to an alternative school. However, the decision of whether to expel the student, remove him from the school, or transfer him will fall on the school district.

School district superintendent Addison Davis issued a statement following the incident asking parents to talk to their students about diversity.

"We do not tolerate this type of behavior and we are disheartened that any of our students would be subject to discrimination," Davis said. "Fleming Island High School administration and district leadership are working together to create a school-wide plan of action to strengthen the climate and culture while celebrating the school’s diversity."

The school also contacted the Sheriff’s Office about the incident, but after deputies looked into it they said no crime was committed.