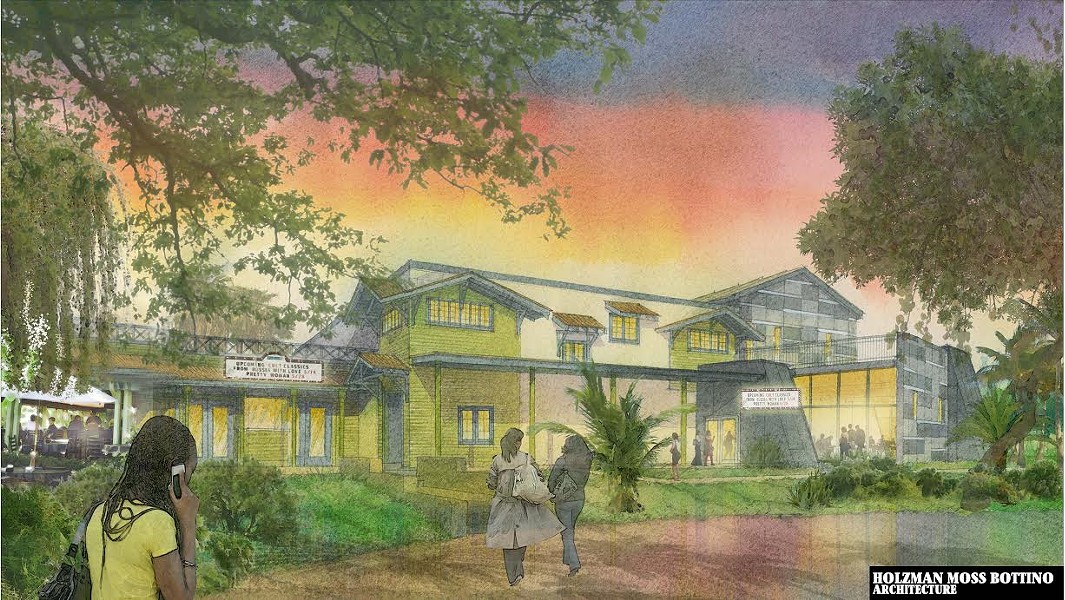 The Maitland Development Review Committee conducted an interim review of the Enzian Theater’s expansion plan Thursday at Maitland City Hall, discussing topics such as parking, landscaping and signage but not passing judgment on the plan itself.

This review was “not meant to be a recommendation meeting,” according to the agenda notes, “but [was] intended to provide guidance to the applicant based upon concerns that the residents and the City may have concerning the project.”

Enzian Executive Vice President Elizabeth Mukherjee says the theater still hopes to break ground on the expansion before the 2018 Florida Film Festival and be finished by the 2019 festival. But for that to happen, the Enzian must resubmit the proposal for formal approval by the City of Maitland’s Planning and Zoning Commission, and that might not happen until this summer.

“The applicant requests interim review of proposal to amend the existing, planned development, to obtain approval to permit the addition of 11,500 square feet on the first floor, 3,706 square feet on the second floor and a 530-square-foot covered entry/walkway,” Thursday’s agenda states. “The building height is proposed at 28 feet. Modifications to the existing structure include but are not limited to two new theaters with a total of 130 seats [80 and 50], lobby area, restrooms, concessions area, theater kitchen on the first floor and offices on the second floor.”

Mukherjee clarified that the existing theater’s movie-watching capacity was 230 but would be reduced to 210 after the expansion to help ease the parking crunch. Indeed, parking was the main issue discussed at Thursday’s meeting, with Maitland requesting a formal valet-parking plan and the agenda stating, “Enzian proposes 113 on-site parking spaces and an additional 90 off-site parking spaces at Park Maitland School … for a total of 203 parking spaces.” But verifying those numbers has proved problematic, and Maitland and the Enzian are also still working on a plan that would improve parking-lot lighting while not over-lighting the property and destroying what Enzian attorney Hal Kantor described as an “ambient” quality.

The structure itself was not discussed, leading one to believe that the sticking points all relate to other matters, including landscaping, which took up more discussion than any other topic except parking. For instance, “it appears that the Live Oak across from Orlando Avenue has died,” the agenda reads. “Please address the condition of this tree and remove if it is dead.” However, while Mukherjee admits the tree is ill, she says she is still hoping for a recovery.

Buffer walls on the north and east sides of the property were also discussed, but no recommendations were made. Both Maitland and the Enzian admitted that building a wall would be difficult without destroying some of the native vegetation.

One proposal that now seems set in stone is the permanent discontinuation of the outdoor “Pitcher Shows,” as the agenda states, “Outdoor movies are prohibited and will not be shown on-site.”

In contrast to the public hearing held in January 2016, when many of Enzian’s neighbors complained about the proposed expansion, Thursday’s meeting drew just one citizen speaker. Her concerns centered more on issues related to the City of Maitland, such as better no-parking signs and a request to ban parking on Leslie Terrace. Improvements to the pedestrian crosswalk on Magnolia Road were also discussed.

For more information on the interim review, visit www.ItsMyMaitland.com.