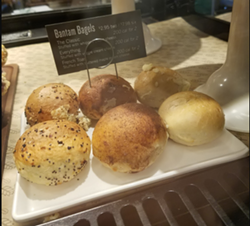 Let me just preface this by saying that Bantam Bagels did not invent the cream-cheese-stuffed mini "bagel bomb."

Christina Tosi, the sugar savant behind Momofuku Milk Bar, starting making these little stuffed puffs in the late 2000s, when David Chang's empire was but a small blossom.

Since then, a company called Bantam Bagels has commercialized production of Tosi's original, and went on the NBC show Shark Tank to procure funding for the product. They won $275,000 for the stuffed bagel treats. They're now doing $2 million in sales.

The deal with Starbucks originally rolled out the bagels to one-third of its stores. As of now, they're in almost all of them. These were most recently seen at the Starbucks located inside the Grand Bohemian Hotel on Orange Avenue in downtown Orlando.