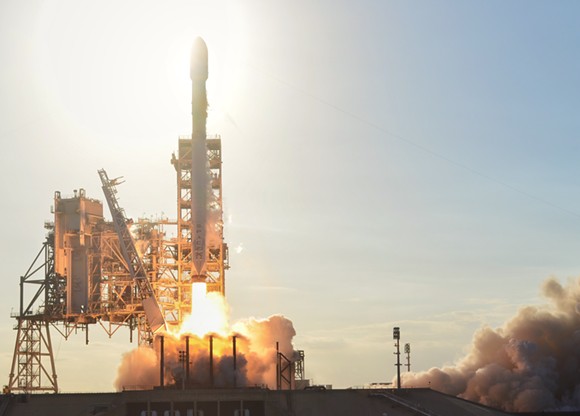 The 7:15 a.m. liftoff was the second attempt after a scrub on Sunday morning during an identical launch window. According to SpaceX, this was caused by a “sensor issue” in the Falcon’s booster.

The classified payload for this morning’s NROL-76 launch is suspected to be a data relay satellite, according to Space News. Tracking and data relay satellites are orbital communications devices that typically are used in assisting spacecraft for other missions. SpaceX CEO Elon Musk has called the payload a spy satellite which implies a function for defense-intelligence purposes. As usual, NRO spokeswomen declined to comment on the payload.


The National Reconnaissance Office is a clandestine agency that manages and operates United States' defense satellites in space. Since the 1960s, the agency has been overseeing satellites for the CIA, Air force and, NSA.

According to NRO director Betty Sapp in a 2015 congressional hearing, SpaceX was contracted for an undisclosed amount of NRO launches. Monday's launch was the first government-contracted mission for SpaceX.


Central Floridians living as far as Winter Park reportedly heard the rocket's sonic boom upon its return to Earth. After the NRO device was sent into orbit, the Falcon 9's first stage booster made its way back to Earth for a ground-landing on Patrick Air Force Base's Landing Zone 1 in Cape Canaveral.

The Falcon's first stage booster isn't the only part of the rocket SpaceX intends to preserve post-launch. Last month after the SES10 Falcon 9 launch, Elon Musk mentioned in a press conference that a part of the payload fairing had also been saved for the first time in a SpaceX launch. The bus-sized fairing serves as the payload's outer shell and costs upwards of $6 million. Saving the piece is a part of the company's wider goals of rocket reusability, but whether or not the fairing was saved on this NROL-76 mission is unclear.

London-based communications client Inmarsat will have the next SpaceX launch slated for mid-May from Cape Canaveral.