With only weeks until it opens, Fun Spot adds tunnels and more track length to its latest coaster 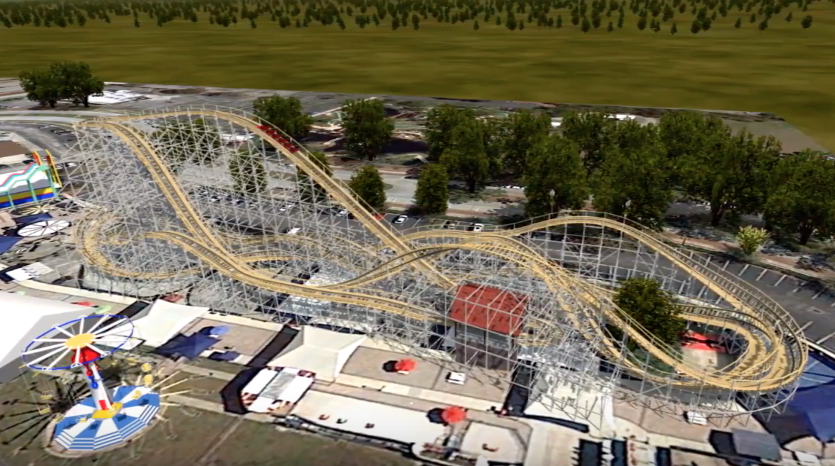 Back in February, we shared “Everything we know about Fun Spot's new $6 million coaster Mine Blower.” But since then, Fun Spot has been releasing updated information about the new wooden coaster, which is planned to open this summer.

In a recent interview with News 13, Gravity Group confirmed numerous new details of the coaster, including that the track will be 34 feet longer than originally announced.

We’ve known for some time about the Looney Tunes-looking ride vehicles with dynamite sticks along the front of the cars. Each train will seat 12 riders in six rows with two seats each. One of features of the wooden coaster is a barrel roll that will turn riders upside-down and a 90- turn, all with a lap bar-only harness system.

Rumors of tunnels being added to the coaster have been circling for some time, but Gravity Group has now confirmed that, unlike the original rendering, there will be tunnels along the coaster. We have no details on where these tunnels are going, but local theme park vlogger Midway Mayhem has mentioned that at least one of them will likely go on part of the ride where it crosses through the structure underneath other areas of the track.

Jim of WildGravity Travels, a local theme park and news site, has noted that in recent weeks we’ve been seeing fewer deliveries to the site but more work on the north and south ends of the track, where a large number of curves will be featured. The coaster did recently top out at 83 feet, a foot taller than originally announced. Jim also notes that, unlike most coaster design companies, Gravity Group typically outsources various aspects of the design, allowing for quicker build time and likely a low cost.

We still don’t know if the new coaster will include any theming beyond that of the coaster cars themselves, but the ride will include a new ride-specific mascot, a dog named Nitro.

No specific opening date has been released, but it should be open by the mid-summer tourism rush.