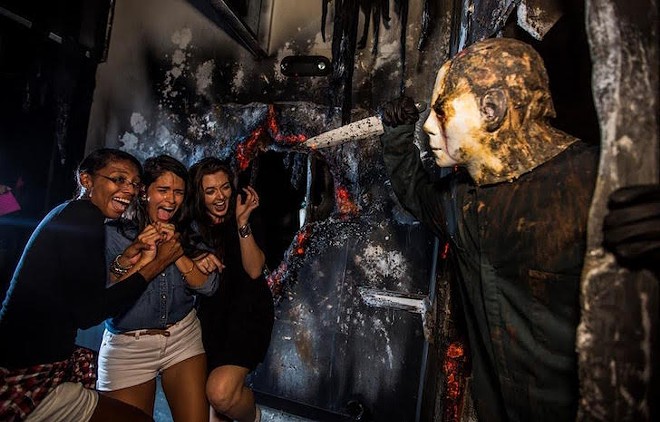 Late last week permits were filed with the City of Orlando for the construction of the haunted houses, known as mazes, for this year’s event. At least four permits have been filed with the city regarding the event.

Currently there are no solid details on what themes the houses will have, but the permits do confirm that the sprung tent behind the Simpsons area will be used, as will at least one other tent and the Men in Black outside queue area.

The tents and the queue have all been used before.

There has been some speculation on if we were to see the tents this year due to the Nintendo land construction that is rumored to be happening near this area. While Nintendo has been confirmed for Universal Orlando, no location or timeline has been set. If current rumors of it taking over Universal Studios Florida’s Kids Zone area are true, Universal will likely be forced to relocate these tents which typically queue through Kids Zone.

Universal has confirmed that American Horror Story will be returning this year, though details on what the house will include or where it will be located are still sparse.

A few other intellectual properties have been rumored, including the return of The Walking Dead, Insidious and Saw. By far the two strongest rumored houses are The Shining and Evil Dead.

Links on the Halloween Horror Nights website currently point to a photo of a promotional flyer with what looks to be a reference to the Evil Dead. While this tree character does share similarities with the haunted trees in the film, there’s no telling what this image really is. This is worth taking into consideration because Universal is famous for its hints regarding Halloween Horror Nights details. Various hints and information uncovered by HHN diehard fans also seem to be pointing to a house dedicated to the 1980 Stanley Kubrick classic The Shining.

Other rumors surrounding HHN include more holiday-specific decorations in the Harry Potter areas, possibly including the live-action Death Eaters that debuted at Universal Studios Japan last year. Universal did recently confirm new Christmas updates will occur in the Potter areas, causing some to speculate that Potter creator J.K. Rowling might’ve approved a slew of new holiday updates to the lands she helped create.

For now, we have four permits and one confirmed film franchise. Luckily, the wait for more won’t be long. The Halloween Horror Nights Hollywood twitter account confirmed more houses would likely be announced in mid-May, meaning Orlando will possibly announce more around that same time.