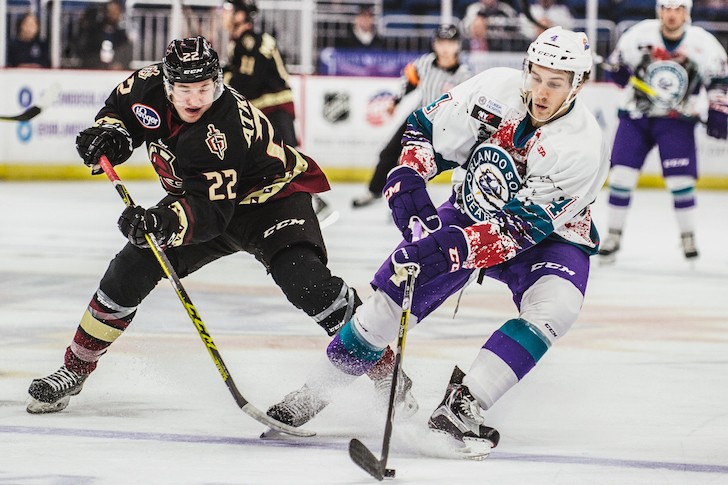 The Orlando Magic and its owners, the DeVos family, are planning to purchase the Orlando Solar Bears hockey team.

Magic CEO Alex Martins made the announcement about the purchase from ECHL on Wednesday in a press release. The Solar Bears will play in the Amway Center for the 2017-18 season. The DeVos family, which includes Education Secretary Betsy DeVos, bought the basketball team in 1991.

"We are thrilled to purchase the Solar Bears, giving the team the opportunity to continue to play in Orlando," Martins says in a statement.   "The Solar Bears’ fan base has been outstanding and we look forward to an exciting future."

The DeVos family previously owned the Orlando Solar Bears of the International Hockey League from 1995 to 2001. After IHL ceased operations in the early 2000s, ECHL announced in 2011 that its Board of Governors had approved the Solar Bears' membership application into the league. Since they started to play under ECHL in 2012, the Solar Bears have qualified for the Kelly Cup Playoffs in three of their five seasons.

"We are excited and grateful the DeVos family has agreed to purchase the Solar Bears to continue to grow the brand and expand the growth of the sport in central Florida," says Brian McKenna, commissioner with the ECHL, in a statement. "A track record of successfully operating professional sports franchises, an in-depth knowledge of the Orlando sports environment and as creators of the original Solar Bears brand, the Orlando Magic and the DeVos family are the ideal owners for the professional hockey team."

The teams celebrated the deal online by showcasing the mascot friendship between Stuff the Magic Dragon and Shades.

Welcome to the family @OrlandoHockey!

The Orlando Magic and DeVos family will be purchasing the Orlando Solar Bears! pic.twitter.com/QM418dbWY0