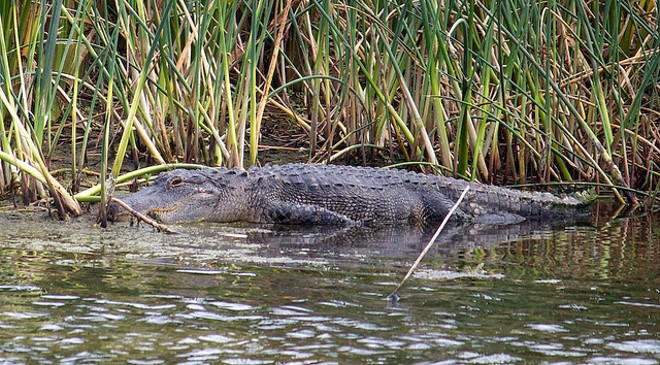 Last weekend, a 10-year-old girl in Orlando pried open a gator's mouth to free herself while swimming at Moss Park, officials say.

According to the Florida Fish and Wildlife Commission, the incident occurred at around 2:30 p.m last Saturday, May 6, in a designated swimming area of Lake Mary Jane. The girl was sitting in roughly two feet of water and ten feet from shore, when the 8-foot-9-inch long alligator bit her on the leg.

The girl was able to remove her leg by prying open the gator's mouth, but she received several puncture wounds to her lower calf and knee, says the FWC. Lifeguards were on duty and were able to assist with the incident. The girl was then taken to Nemours Children's Hospital and has reportedly since been released.

The gator was captured Saturday afternoon and killed. FWC is investigating the situation.

It would appear the girl freed herself from the gator by sticking her fingers in the animal's nostrils, a trick she says she learned at Gatorland. The girl told WFTV that she then pried the animal's mouth open to free her leg.