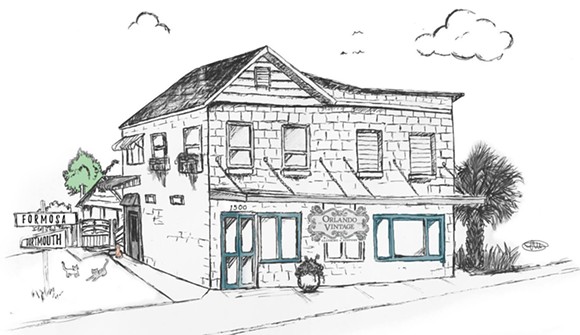 After 18 years on Fairbanks Avenue, Orlando Vintage Clothing & Costume is moving into a new – well, new to them – building. A grand opening event happens Saturday afternoon, June 3, to welcome shoppers to the new location.

Though the move is only about a mile in distance, it returns Orlando Vintage to College Park, which owner Lisa Smith looks at as “a coming home of sorts,” as the store’s original location was on Edgewater Drive.

Smith purchased the historic property on Formosa Avenue, a freestanding two-story building with original hardwood and terrazzo floors built in 1952. At 4,500 square feet, the new location is more than double the size of their Fairbanks location, allowing for better organization of clothing by period, as well as an on-site photo studio.

Since 1995, Smith has not only run Orlando Vintage Clothing & Costume as a retail vintage store and costume rental, but has also worked as a wardrobe stylist for many TV and film productions, including the 2016 film Live by Night, the upcoming remake of It, and television shows such as Masters of Sex, The Man in the High Castle, Mad Men, Boardwalk Empire and Vinyl.