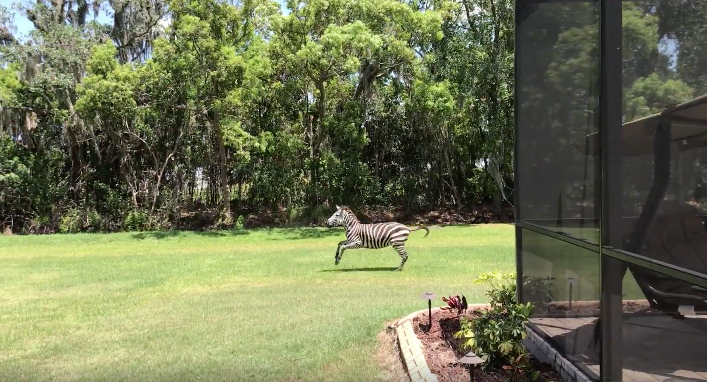 An exotic pet escaped from its owner's care last weekend, something that happens quite frequently here in Florida.

During this time the animal slammed into the side of a Ford F-150. The driver was taken to Brandon Regional Hospital, where he was treated for minor cuts, according to the Times.

Hillsborough County Sheriff's Office caught this aerial footage of the zebra, who appears to be enjoying himself on this secluded beach...

Traffic Crash - A Ford F150 p/u was W/B on 672 just E of Amber Sweet Ln when the Zebra which escaped from private property ran into the p/u pic.twitter.com/QcyaodpjdU

The chase ended in the backyard of Winauma resident Mark Ross, who told WFTS in Tampa that "I kept telling myself, 'There's no way there's a zebra in my backyard.'"
Authorities retrieved the animal from Ross' backyard and returned it to Caudill's care, who did not clarify exactly how the animal escaped. However, she did assure WFTS Tampa that she was up to code with FWC inspections for her compound.

In 2009, Caudill obtained an animal welfare act exhibitor's license from the USDA. Authorities have since asked a federal judge to revoke her license after she was deemed unqualified to care for 37 tigers that were under her care, reports the Times.

Caudill also had two zebras escape her care back in 2015.