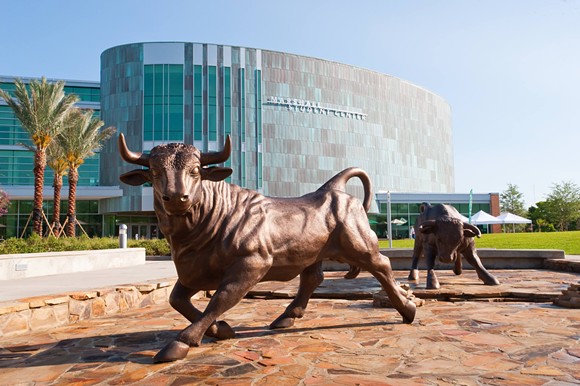 Florida lawmakers on Monday approved a budget that will dramatically increase university funding and student financial aid, while leaders defended a performance standard that could impact the University of South Florida.

The new budget (SB 2500) will increase the Bright Futures merit scholarship program to cover 100 percent of tuition and fees for the top-performing students, known as “academic scholars.” It will also extend the scholarships to summer classes and provide $300 per semester for textbooks.

Need-based aid will increase by more than $126 million, with the bulk of it going toward “Florida student assistance grants,” the state's largest program to help students with financial need.

Operating funds will increase for all 12 state universities, including $245 million in performance-based funds, a $20 million increase.

The agreement provides $71 million to universities to attract top-level faculty and researchers, with another $50 million aimed at high-achieving medical, law and business graduate schools.

But controversy erupted over the weekend when University of South Florida advocates learned a related budget bill (SB 374) had been changed Friday to increase the performance standard for “pre-eminent” universities from requiring that more than 50 percent of students graduate in four years to a 60 percent standard. USF has a 54 percent four-year graduation rate.

“Late at night Friday, the goal posts changed,” said House Democratic leader Janet Cruz of Tampa, where USF is located. She said the school had “been cheated” out of its effort to obtain pre-eminence.

But Negron, R-Stuart, and Sen. Bill Galvano, a Bradenton Republican who oversees higher-education spending, defended the performance standard, saying it would not apply to USF or any of the other schools until next year.

They also said USF would be held to the current pre-eminence standards which are tied to a 70 percent goal for graduating students in six years and the school would come up just short with a 67 percent rate.

“No one was punished in this budget or in the conforming bill,” Galvano said. “To me, moving a goal post or punishing is when someone is entitled to something and then you take that entitlement away.”

Galvano also said he was open to discussing the 60 percent standard when lawmakers meet in their 2018 session early next year, before the new pre-eminence standard would be applied to the 12 universities.

“Everything we're talking about is prospective and based on future achievement,” he said.

Senate Appropriations Chairman Jack Latvala, R-Clearwater, said USF will be a financial winner in the new $82.4 billion budget, including a $43 million boost in operating funds and $12 million for a downtown medical school project.

“You don't see the forest for the trees, this is a case of that,” Latvala said. “That's a lot of new money.”

Rep. Shawn Harrison, a Tampa Republican who is a USF graduate, said the Tampa university was “not treated unfairly” in the budget but the abrupt change in the pre-eminence standard was troubling.

The budget also has raised concerns from state college advocates, who are upset over a $30 million cut in remedial education funding.

But the Association of Florida Colleges said the reduction will result in a permanent average cut of $1.1 million for each school, ranging from over $4.6 million at the larger colleges to $190,000 at the smallest schools.

More than 40 percent of high-school students entering the college system need help in improving their math skills to be able to handle college algebra classes, the college group said.

It will require universities to offer block tuition, where students pay a flat fee per semester rather than a credit-hour charge, by the fall of 2018. It will create a 13-member Board of Community Colleges to oversee the state college system, which is now under the Board of Education.

The legislation also caps enrollment for students pursuing four-year degrees at state colleges to no more than 15 percent of the total enrollment at each school.