Orlando Fringe 2017 review: 'The Other Woman: My Mother-in-Law' 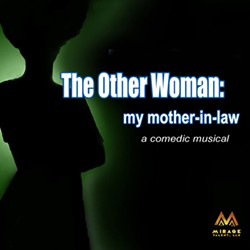 In most of American pop culture, mother-in-law jokes died a natural death around the same time as Henny Youngman, but Jacob and Samantha Eaddy seem determined to revive them singlehandedly with their original musical. They've restated the show, which was last seen at the 2016 Fringe, with a new cast, but I can't say the intervening year has resulted a in a production I can recommend.

Four women (Kenneithia Mitchell, Wendy Ringhausen, Natasha Hill, and Beth Hall) meet not-so-cute on a ladies-only cruise ship, kvetch to each other about their meddlesome MILs (Quatessa Jerome, Khyrsti Hunsworth), and … that's about it. Their plotless complaining somehow fills 90 long minutes, padded out with pastiche musical numbers that are all either ripped off from existing melodies, or sound like they were; an uptempo gospel number generates a little heat, but despite the efforts of some big voices among the ensemble, few of the generic tunes make much impact. It's impossible to judge the Eaddys' lyrics since the prerecorded synthesizers and ragged, pitchy choral work render the words virtually unintelligible, and Jacob's choreography would look comically overcrowded on the modest Gold stage even if the exuberant dancers executed it with precision.

It's bad enough that The Other Woman is plodding and amateurish; but worse, it's insulting to anyone who has ever been, had, or even met a mother-in-law. The stale script relies on retrograde misogynistic stereotypes, then shamefully wraps them in a fig leaf of faux female liberation. Be warned: This is among the most painful examples of cruise entertainment I've ever endured, and I've been on Carnival.