Orlando's Confederate statue will be repaired, moved from Lake Eola 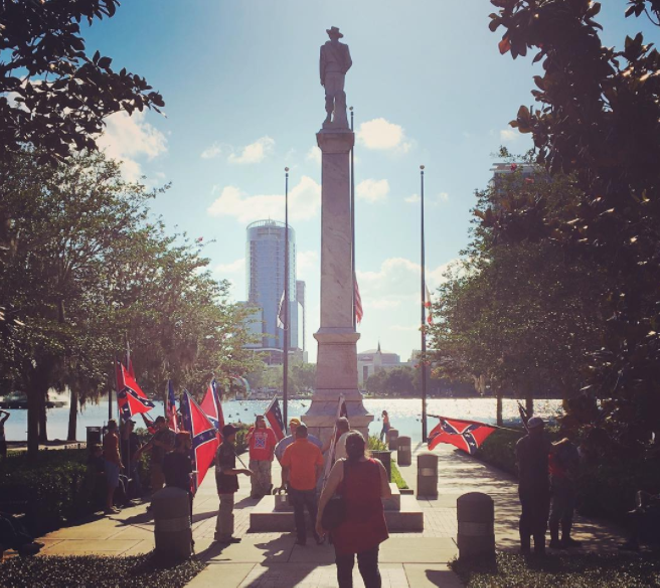 The Orlando City Council came to a consensus Monday on Mayor Buddy Dyer's plan to repair the Confederate soldier statue that has stood at Lake Eola Park for 100 years and move it to Greenwood Cemetery.

Commissioners made the decision as protesters clashed outside City Hall under the shade of dozens of Confederate battle flags. Local residents who wanted the statue taken down say it's a racist symbol of white supremacy and slavery, while Confederate supporters say the statue is a way of memorializing soldiers who died in the Civil War.

"Some, like myself, see them as historical markers dedicated to men who died during a war," Dyer says. "Others perceive it as a symbol of white supremacy and the vestige of slavery. With this understanding and our city’s commitment to inclusiveness, I am proposing to move the statue to a more appropriate location at Greenwood Cemetery."

Orlando's "Johnny Reb" statue was first placed on Magnolia Avenue in 1911 before being moved to Lake Eola Park in 1917. Commissioned by a local chapter of the United Daughters of the Confederacy, the monument has a plaque honoring "soldiers, sailors and statesmen of the Confederate States of America." In 2015, the progressive group Organize Now asked the city to remove the statue. Last week, David Porter, a local blogger and former member of the Orlando Sentinel editorial board, again called on the city to take down the monument before the June 12 ceremony at Lake Eola to honor the Pulse victims.

Among those who spoke at the meeting were several dressed in Confederate gear, including a couple in Civil War military attire. David McCallister, of Wesley Chapel, told commissioners between boos from the public that treating Confederate veterans this way was a symbol of how veterans would be treated in the future.

"Putting the monument away in a cemetery would be banishing it into the closet of obscurity," he says. "I didn't think Orlando liked closets. A move like this would be seen as disuniting and offensive, and if you think otherwise, by all means, put it to a referendum."

"It's not about slavery," Mills says. "[My grandfather] didn’t own shoes until he went and joined the army. … That is a monument to U.S. military soldiers."

While many on the Confederate side argued the statue was about "heritage, not hate," their public comments were punctuated with revisionist ideas, with one person even going to far to claim that the Emancipation Proclamation did not free any slaves at all and others saying the Civil War was not about slavery. Details about who did what in a war that ended in 1865 matter little, though, in a debate about how Confederate symbols have been used since then. During the Civil Rights Movement, white segregationists opposed to integrating schools and other public places used Confederate imagery to symbolize their anger and discontent. The Ku Klux Klan and other white supremacist organizations have adopted it as their symbol. The ideology inherently attached to the flag inspired Dylann Roof to shoot nine black people at Charleston's Emanuel African Methodist Episcopal Church in 2015.

Robin Harris, an organizer from Orlando, told commissioners Monday night said she agreed with the mayor's plan to move the Confederate statue to the cemetery so that people can mourn their relatives.

Porter, who started the petition to have the monument removed, said his skin is a "badge of slavery" and that Orange County residents have not fully reconciled with the county's history of 34 lynchings, including the 1920 lynching of Ocoee resident July Perry in Orlando.

"I'm a descendant of African people who chose to survive the Middle Passage," he says. "Porter is the name of the English man who owned my father's people. … To this day, I still carry my slave name."

The city plans to dismantle and move the statue to the Confederate veterans section in Greenwood Cemetery and add an educational panel near the monument to give historical context. Dyer got a majority on the council to support his proposal but didn't require an approval vote from city commissioners because it was an executive decision. Commissioners Jim Gray and Tony Ortiz opposed the decision, while Robert Stuart was on the fence regarding what to do with the statue.

"I believe this proposal balances the inclusive morals of our community today, while carefully preserving historic artifacts from our past that can be used to further educate and serve as important lessons in today’s society," Dyer says.

Dyer gave a rough estimate of $120,000 as the amount it would take just to move the statue. City spokesperson Cassandra Lafser says the cost is subject to change and depends on what city staff find out when they examine the statue and have a better sense of the structure and the repairs that will need to be made. The city did not give a timeline for when the statue would come down.