Orlando Fringe 2017 review: ''We Burned Down the White House' and Other Canadian Folk Songs' 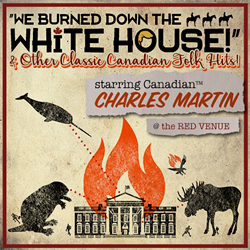 In the War of 1812, British and Canadians torched the White House. Though some might argue we need a similar charring (or at least a good smoking-out) now, Charles Martin* has come to the United States in peace. Instead of armaments, he brings his guitar, electric piano, outsized stage presence and 14 original songs to the Red Venue.

Martin’s performance is alternatingly frenzied and laid-back, bawdy and introspective, Jack Black and Stompin’ Tom Connors. Speaking of Connors (the poet laureate of 20th-century Canadian folk-pop), Martin could actually use a bit more of him, as the production drifts when he isn’t singing specifically about Canada. After all, as the show’s title implies, we’ve come to hear culturally relevant tunes like “Get Me the Fuck out of Edmonton,” “The Toronto Song,” “The War of 1812” and my personal favorite, “That’s My Wife,” about Martin’s love for his 1976 RV. But when the selection shifts to “My Mom’s Coming to My House,” “She Thinks You’re Ugly” and a musical rant about computer operating systems – all songs that could just as easily be sung by a Floridian – the show loses some of its raison d’être. (That French cliché is intentional. You’ll see.)

Despite that lack of focus, there’s no faking talent. And Martin has it, right down to his bare feet and no-frills production design. If he’s a typical Albertan, get me the fuck into Edmonton.

*"Charles Martin" is actually two people: Former Orlandoan, now Canadian, Charles Martin is "Charles Martin (Actual)." He wrote this show and appears onstage here and there. His American colleague, Wes Borg, wrote the songs and plays "Charles Martin (Canadian)" in the show. Confusing? A bit. But it shouldn't affect your enjoyment of the show in any way.