There's a 45 percent chance 2017's hurricane season will be brutal

Today, the National Oceanic and Atmospheric Administration released its forecast for the 2017 hurricane season, and essentially there's a strong likelihood that this summer is going to be tough. 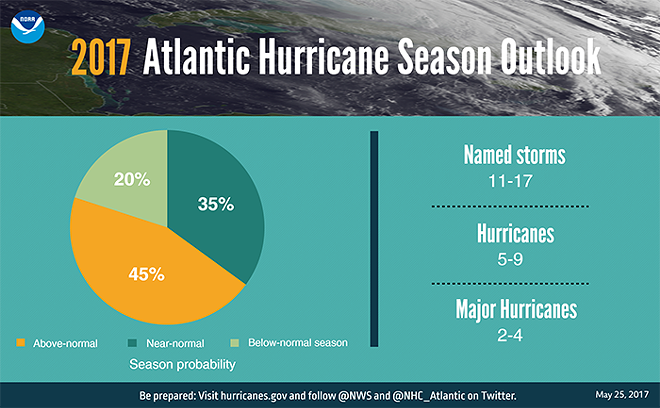 "The outlook reflects our expectation of a weak or nonexistent El Niño, near- or above-average sea-surface temperatures across the tropical Atlantic Ocean and Caribbean Sea, and average or weaker-than-average vertical wind shear in that same region,” said Gerry Bell, the lead seasonal hurricane forecaster at NOAA’s Climate Prediction Center.

NOAA does admit that climate models do account for "considerable uncertainty" as to how bad the hurricane season will get. So like every honest TV weatherman will tell you, "You can't predict the weather."

As of late, Florida has had a pretty lucky streak in terms of major storms. Until 2016's Hurricane Hermine, Florida hadn't been touched by a hurricane since Wilma in 2005.

It's highly doubtful that the next 10 years will be this uneventful.