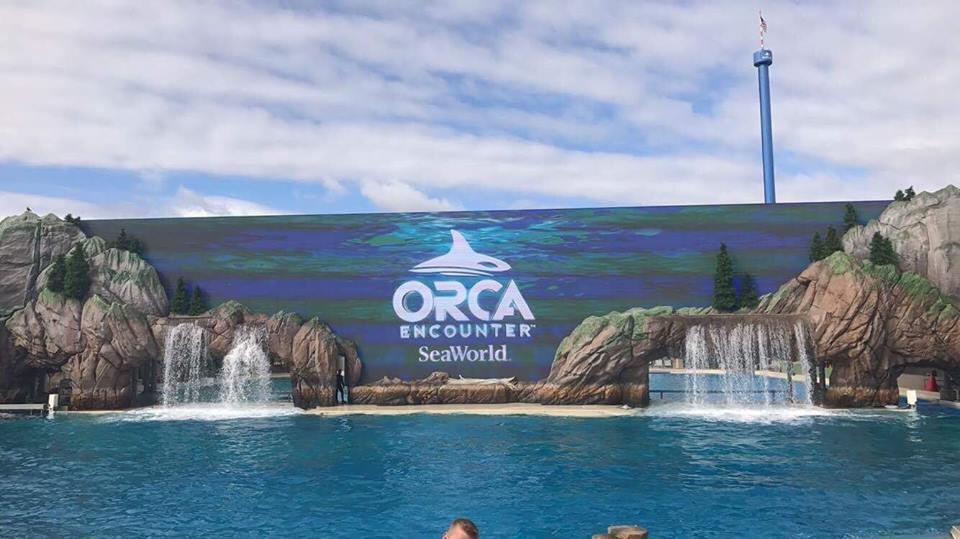 SeaWorld San Diego began soft openings of its new orca show, replacing One Ocean. The new show, which will be coming to SeaWorld San Antonio in 2018 and SeaWorld Orlando in 2019, replaces the theatrical elements with educational ones.

In the past few years, SeaWorld has shifted away from the use of the term "killer whale" and now prefers to call the large oceanic dolphin creatures orcas. Just as SeaWorld recently did with its dolphin shows, the company is now transitioning the orca shows to a more education-based, documentary-style show.

The new show, simply known as Orca Encounter, takes place in an updated amphitheater. The "stage" now features natural-looking rockwork, with waterfalls and faux shrubbery. A massive high-definition infinity screen stretches across the back of the performance tank.

Video segments throughout the show feature documentary-style footage of wild orcas performing the same behaviors as the live orcas in the tank. Large portions of the show are devoted to the video segments, with the live orcas almost becoming secondary during these segments. Every action of the orcas during the show is now explained in detail, including how the actions relate to natural behavior. There are also mentions of how SeaWorld’s orca research has helped understand wild orcas.

One thing missing from the show is any mention of Shamu, the name SeaWorld previously used as a catch-all for their orcas. The Shamu branding is gone from the stadium, formerly known as Shamu Stadium, the show itself, and the Dine With Shamu experience, is now just known as Dine With Orcas.

None of the changes with the Orca Encounter should come as any surprise; it’s all part of a larger shift at the struggling zoological company. The shift away from entertainment-driven animal shows to educational ones is part of a larger strategy.

Now the entertainment comes from rides and attractions while the animals are presented in a more informative light. SeaWorld has also vowed to end breeding of the orcas, meaning this will be the final generation of orcas in captivity in the United States. It should be noted that the birth control hasn’t been as successful as desired with other animals at SeaWorld – a Commerson’s dolphin at Aquatica did have an unplanned pregnancy, though the birth was ultimately unsuccessful.

The new orca show is still in previews, so segments of it could be changed at any time. And the show that eventually comes to Orlando could be quite different than the one currently being offered in San Diego, but this does give a good indication of what SeaWorld plans to do with their most controversial animal.