The famous double-decker hop-on, hop-off buses are headed to Orlando 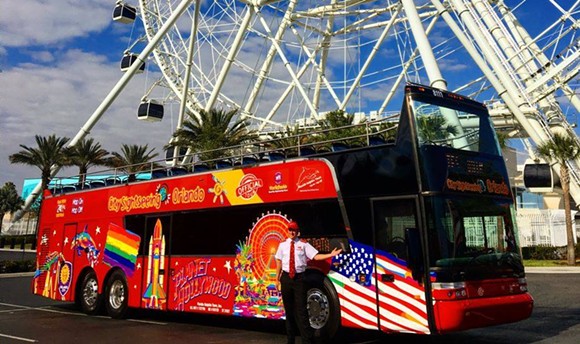 Nearly every major city in the world has the iconic open-top, double-decker buses that tourists use to sightsee around the city. Now these famous buses are finally making their way to Orlando.

Starting this summer, Florida Dolphin Tours will be offering , double-decker bus tours of the tourist district. The local tour operator has partnered with Spain-based City Sightseeing to offer the new tours. City Sightseeing operates the double-decker open-top buses in over 100 cities around the world, including Miami, Dubai, and Washington, D.C.

According to the Orlando Sentinel, in Orlando guests can choose between two ticket options. One will provide direct service to either Universal Orlando for $8 per day or Walt Disney World for $14 per day from the I-Drive corridor. The other tour will be more typical of the , hop-off buses that City Sightseeing operates in most other cities. That tour will include 18 stops including Universal Orlando, SeaWorld, Disney Springs, the Florida Mall, the Premium Outlets, the Orange County Convention Center and I-Drive 360. That tour ranges in price from $28 for a one-day adult ticket to $75 for a week-long adult ticket.

The Orlando area has offered various other bus tour options for tourists, to mixed results. The I-Drive Trolley, which is partly paid for by businesses in the corridor, has proven to be popular for many tourists, but its limited route means that only those who are interested in traveling north or south along I-Drive find it useful. Orlando used to have a bus service that linked area cultural institutions, but that service was canceled after it proved not to be very popular.

This new service offers photogenic buses and stops at numerous tourist hot spots, but the open top might prove to be an issue during our frequent afternoon rainstorms.