We've already posted about where you can get free fried dough rings for National Donut Day today, but there are more than a few spots around town who aren't participating in the commemorative "holiday" but have some of the sweetest confections in town.

Here, your gratuitous #donutporn for today's festivities. If you've got some cash in hand (and some gas in the tank — some of these are a little far-flung), head out and treat yourself.

We're stoked Canadian-born Celine Duvoisin has made her home here in Orlando so we can eat her creations. This UCF-area shop also serves up weekly "bullshit blend" milkshakes topped with a donut and ice cream cone.
12226 Corporate Blvd., facebook.com/Valkyriedoughnuts 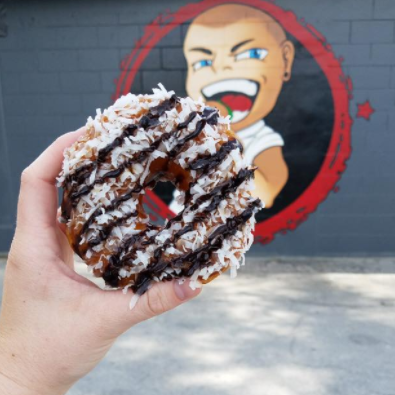 Find out the whereabouts of this sky-blue bus by following them on Facebook. They're regulars at Food Truck Bazaars and also make appearances elsewhere, like at Bad As's Sandwiches (shown).
facebook.com/littlebluedonuttruck