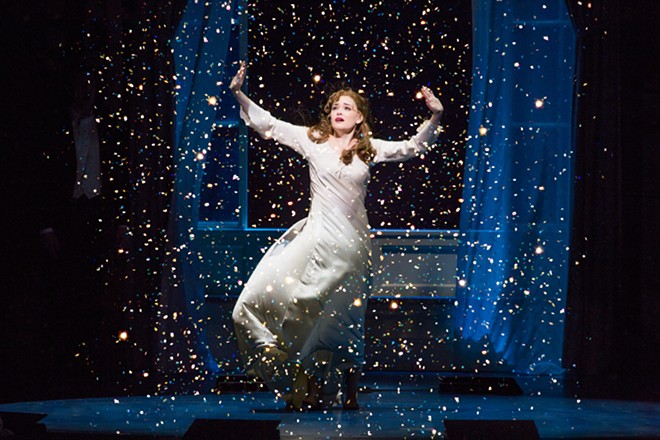 Along with Dracula and Sherlock Holmes, Peter Pan is probably the literary character who has seen the most media adaptations in living memory. And while familiarity may breed contempt, there’s no city on earth where the “boy who wouldn’t grow up” will get a warmer reception than Orlando, where Peter and his Lost Boy pals not only have their own attraction at the Magic Kingdom, but are featured in the park’s parade and nightly fireworks. However, while the opening night audience at the Dr. Phillips Center applauded the touring production of Finding Neverland loudly enough to bring a dead fairy back to life, I’m afraid there isn’t enough pixie dust in Central Florida to make this abrasive musical adaptation take flight.

Based on David Magee’s Oscar-nominated screenplay (which was in turn based on Allan Knee’s non-musical play The Man Who Was Peter Pan), Finding Neverland tells the mostly true story of author J.M. Barrie (Will Ray) and his relationship with the widow Sylvia Llewelyn Davies (Christine Dwyer) and her son Peter (Ben Krieger on opening night, rotating with Colin Wheeler and Mitchell Wray). Barrie’s bond with Peter and his high-spirited brothers (Finn Faulconer, Mitchell Wray and Jordan Cole on opening night) inspires his famous fantasy play, which theater producer Charles Frohman (Rory Donovan) insists must be a success after Barrie's last flop.

Finding Neverland’s failure to launch isn’t for lack of trying on behalf of the cast; the kids are all terrific, Dwyer ably channels Kate Winslet’s charms, and Donovan has fun as a flamboyantly fierce Captain Hook. Understudy Will Ray took the stage as Barrie on Orlando’s opening night (Noah Plomgren will perform on Saturday and Sunday) and acquitted himself honorably, if with an inconsistent accent. Visually, the production is a delight, thanks to a rich rainbow of colorful looks from lighting designer Kenneth Posner and projection designer Jon Driscoll; Paul Kieve and Daniel Wurtzel’s glittery special effects; and most of all choreographer Mia Michaels’s energetic modern-influenced movement. Even Porthos the dog (Sammy, handled by Tyler Garstka) performed like a pro.

The show’s mix of elements – domestic drama, backstage intrigue and a beloved intellectual property – should make the perfect ingredients for a family-friendly musical that could please kids as well as critics. Sadly, Finding Neverland never lands the crucial quality of tone. The play’s problems begin with James Graham’s book, which dumbs down the whimsically witty screenplay and inserts an unnecessary second-act romance. The songs, by Gary Barlow and Eliot Kennedy, are mostly meh midtempo ballads with monosyllabic lyrics that would flee from your mind moments after hearing them, if each weren’t reprised repeatedly.

But what finally sinks this pirate ship is Diane Paulus’ direction, which abandons the quiet quirkiness that made the movie endearing in favor of cartoonishly broad pantomime and undercooked melodrama. Comic moments (many involving intrusive self-aware anachronisms) are overextended to the point of awkwardness, while key emotional beats are rushed through – like Barrie and Peter’s first encounter – or omitted entirely – like the climactic funeral – cheating the story of catharsis in favor of a rousing finale.

There are moments of wonder to be found in Finding Neverland, mostly from the joy of recognizing totems of the original tale. But like a pretty puzzle that’s been pulverized by an unruly child, the pieces never seem to fit together. I still believe in fairies, but after this show and her overpraised Pippin, I’m starting to doubt Paulus’ magic touch.