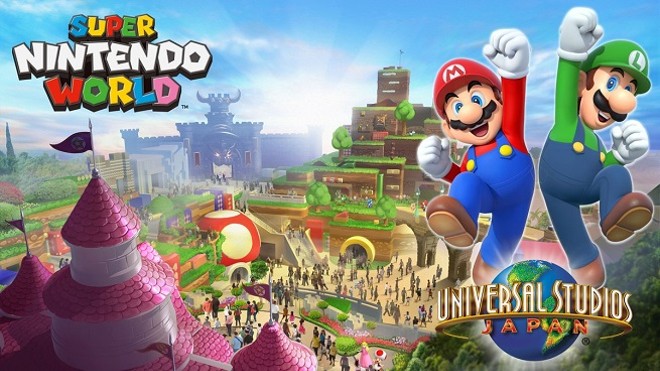 Last week Universal held a groundbreaking for Super Nintendo World in Japan, where they released new details and renderings on the upcoming land.

While the information given is only specific to the new land coming to Japan, it’s safe to assume the Super Nintendo World is coming to both Universal Hollywood and Orlando.

Here in Orlando, little is confirmed, but it's worth a glance at the various message boards to parse out the strongest rumors.

Recently, a map of the supposed Orlando Super Nintendo World plans was leaked on Twitter from an account known for sharing accurate information regarding the entertainment industry. The leaked plans are believed to be an early concept Universal Creative, Universal’s version of Imagineering, used to pitch ideas to Nintendo executives. The leaked plans do include various details that are not in the renderings released for Japan and are believed to have been postponed or canceled for Orlando.

Both the renderings shared and the leaked plans include large green pipes that guests walk through to access the various parts of the multi-level land.

Besides the Mario Kart ride, the Japan Super Nintendo World also confirms Peach’s Castle. At least one of these castles will likely include a character meet-and-greet, which many believe will similar to the multi-room interactive storyline style meet-and-greets that Disney has been rolled out in recent years, such as with Mickey and Belle at Magic Kingdom.

The leaked plans show a Donkey Kong mini-land with a kids play area, family coaster and indoor ride. Donkey Kong will likely be one of two major thrill rides featured in Super Nintendo World. Universal filed a patent a few months back that has coasters on a dual track system with the visible track being a faux track that ride vehicles will jump, similar to how mine cars do in the Donkey Kong game.

A third ride, the one that has received the least confirmation from Universal, is rumored to be themed around Yoshi. This indoor family ride has been described by some as being Universal’s answer to Animal Kingdom’s Nav’i River Journey, which recently opened in the new Pandora land.

The land will also include numerous interactive features, similar to those found in Harry Potter areas but with even more customizable technology. The recent video rendering of the Japanese version includes numerous kinetic energy via spinning coins, cloud platforms, and, of course, Mario flags. A life-size spinning coin was in the background of videos Universal released a few months ago. Those same videos also featured Piranha Plants.

In the Japanese press conference, the speakers all wore large white Mario gloves and red Mario hats. Disney has sold white Mickey gloves for years, and the gloves are one of the most iconic gifts from the park.

Universal is also rumored to be looking for interaction similar to that which Disney has confirmed is coming to Star Wars Land, which is currently under construction at Hollywood Studios and Disneyland. There, characters in the land will interact with guests differently based on how the guests perform on the interactive rides, specifically how successfully they navigate the Millennium Falcon. Few trusted leakers have shared information on the various message boards and social media outlets on how this interaction would work within the Nintendo area, but Nintendo has confirmed that handheld game consoles, including those already on the market, will have the ability to interact with the land.

The leaked plans mentioned earlier include a Zelda mini-land. Most industry insiders now point to this being delayed for a future phase, likely unattached to the Super Nintendo World now being planned. There are also plans for a Pokémon attraction that now seems to be put on the back burner due to ongoing discussions involving numerous entities, all of which have a say in Pokémon.

A massive Nintendo store is also in the leaked plans. This store has been long rumored for Universal Orlando, but its location has moved around quite a bit, ranging from inside the Nintendo land to near the entrance of the park to within CityWalk.

Other aspects of the leaked plan seem to show areas that have either been cut completely or postponed for a future expansion. As of now, we only have plans for the Japan version and in the renderings shared only the central Nintendo characters featured.

One good thing that leaked plans show that many are excited to see is the E.T. ride building. Many have feared that the Nintendo expansion would mean the days are limited to this opening day attraction but, for now, it looks like E.T. will still be welcoming home guests for many years to come.
Japan’s Super Nintendo World has been confirmed to open in 2020, just in time for the Olympics there.

With L.A. bidding for the 2024 Olympics, the Super Nintendo World in Hollywood looks to be on a timeframe to open by then regardless of what the Olympics may decide. In Orlando, we’re likely looking at a 2021 opening, the same year as Walt Disney World’s 50th Anniversary Celebration, for which Disney is planning numerous new shows, major attractions, and lands.