Earlier this month, a mother walrus at SeaWorld Orlando gave birth to the first-ever walrus born in the park.

According to SeaWorld, on June 3, just after midnight, a 14-year-old walrus named Kaboodle gave birth to her first calf. The newborn was the first walrus to be born in captivity at SeaWorld Orlando. 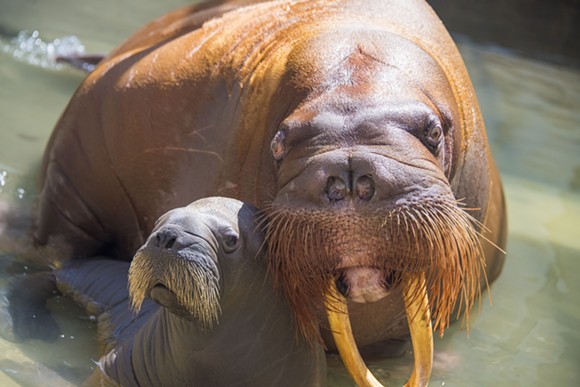 SeaWorld Orlando policy, as of March 2016, was to cease breeding efforts and bringing new orca whales into captivity.

That policy, while it does not directly extend to walruses, does reflect a shift in the role of animals at the park.

SeaWorld is working to refocus aspects of the park to essentially remove many of the more theatrical elements and instead focus on education and conservation.

According to a press release from SeaWorld Orlando, the park's walrus program plays an important role in educating the public on walruses and the dangers they face in the wild – dangers that include habitat loss due to global warming.

Newborn Commerson's dolphin calf dies at SeaWorld
By Colin Wolf
Blogs
Kaboodle and her calf are not currently on public display. They are, however, under 24-hour supervision by the SeaWorld Orlando husbandry team to ensure both mother and calf continue to bond and thrive.