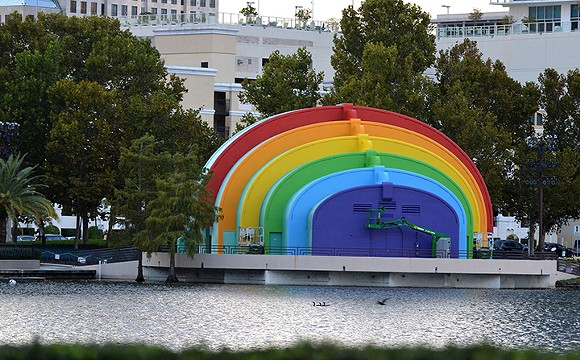 Today, a mere 72 hours after the one-year commemoration of the tragic mass shooting at the gay nightclub Pulse, the Orlando Sentinel ran what can only be described as a giant turd of a guest column.

The short answer is no.

However, Beemer insists on insinuating that evangelical Christians will turn to theme parks in other states, like Kentucky's Ark Encounter or the Creation Museum near Cincinnati, rather than come to Orlando, where, you know, it's just too damn gay.

Never-mind the fact that Beemer once helped The Ark land a tax incentive deal and he co-authored a book with one of the park's founders Ken Ham, which is probably why this column feels so incredibly slanted. But all that aside, let's just focus on all the awful points he somehow musters up.

Here are a few of Beemer's shittiest takes from today's column, ranked:


5. “United Orlando” or “Love Orlando,” with the gay flag in the background, might make some feel good. For evangelical Christians planning family vacations, however, that image is a real turn-off.


4. Once the Ark Encounter is built out in six more phases — which will include roller coasters and rides — the attraction will rival Disney and Universal for guests who seek family-friendly entertainment.


Of course, because the Holy Land Experience is just gutting Universal and Disney.


3. Perhaps the portrayal of the Pulse shooting as a gay-lesbian issue rather than an act of terrorism accounts for the drop in visitors.

Perhaps it's portrayed as a "gay-lesbian issue" because the LGBTQ community was specifically targeted, and it happened at a gay nightclub, you fucking nimrod. Also, attendance at Disney may have dipped, but revenue has gone up. Not to mention attendance at Universal has gone up.


2. Last year, when then-Attorney General Loretta Lynch visited Orlando, she said, “Our most effective response to terror and hatred is compassion, unity and love.” Think about this: Does anyone truly believe that the Pulse gunman, an Islamist terrorist, would have altered his plans to kill people if only we had loved him more?

Yes. That was the problem.


1. Instead of recognizing Pulse as the worst attack on Americans by an extreme Muslim terrorist, killing 49 Americans, the media have turned the attack into something it is not. Those in the news media who suggest that the gay/lesbian population is a large group of consumers have never looked at any serious survey research. A little less than 5 percent of Americans consider themselves gay/lesbian.

I mean, why even recognize the worst mass shooting in modern U.S. history that targeted a gay nightclub in Orlando when only 5 percent of us are gay?