The city's flag committee voted to pick this design as its final recommendation to the Orlando City Council. The blue-and-white flag with the Lake Eola fountain between a golden letter "O" is an update on a previous design that was originally submitted to the city.

The committee had previously directed artists to work with staff to modify their flags after some pointed out that the original fountain design looked like a whale tail. 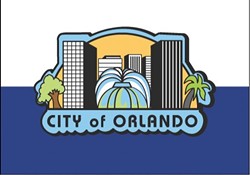 The committee's recommendation will go to commissioners for a final vote sometime in July. The city started a search for its new flag earlier this year and received a number of designs from the public.

Orlando's current flag was adopted by the council in 1980 and depicts the Lake Eola fountain and several unidentifiable buildings.