While Pitbull’s Florida promotion might be getting scrutiny, a band of mermaids on Florida’s west coast are giving the state plenty of publicity in places that rarely talk about Florida for our numerous roadside attractions. Vogue did a photo essay (and accompanying beauty feature on waterproof makeup) with the Weeki Wachee mermaids earlier this month. The spread features several candid shots of the mermaids checking email, showing off their tattoos, and being carried around (you can't walk with a mermaid tail!).

This isn’t the first time the mermaids have become unofficial ambassadors for the state this year. The Tribeca Film Festival featured a short film, The Spring, about Weeki Wachee's daily mermaid shows. 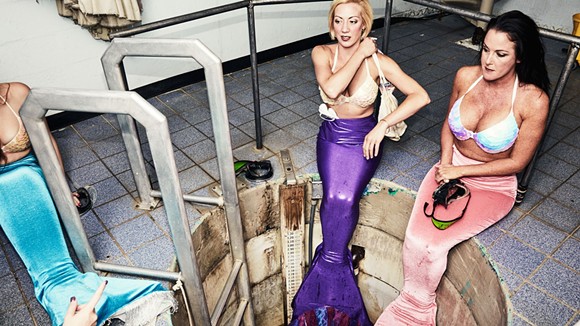 Since then various updates to the facilities, including restoring the original clamshell-style roof of the underwater theater, have taken place. The mermaids made their first international trip in 2010 when they visited the Sea Life Aquarium London as part of a six-day international trip promoting Florida State Parks. Earlier this year the mermaids also did a tour of the east coast of the United States where they visited numerous aquariums.

Florida State Parks, while focused on the natural beauty of the state, are no slouches at preserving the iconic aspects of the attractions they take over. At Silver Springs, near Ocala, they operate the famous glass-bottom boats, but they did close the zoo and other exhibits at the former roadside attraction. In Ellie Schiller Homosassa Springs Wildlife State Park, Lu, the oldest living hippo in the Western Hemisphere, celebrated her 57th birthday at the beginning of this year. No word on whether Vogue will feature Lu the Hippo in any upcoming articles.