A new study published in Plos One suggests that a potentially deadly parasite called rat lungworm is now more prevalent in Florida than previously thought, mostly due to climate change.

Though fatality rates for what's referred to as an Angiostrongylus infection are relatively low, the parasite can still cause a form of meningitis, and if the infection is severe enough, it can also cause coma or death.

Typically, symptoms include headaches, stiff neck, fever, vomiting, nausea, and paralysis of the face and limbs. Children can exhibit nausea, fever and vomiting.

Angiostrongylus infection, for which the CDC says there is no treatment, comes from larvae in infected rats, who then leave behind tainted poop, which is then eaten by snails. The rats then eat the tainted snails and this awful cycle continues.

Humans and animals join the party when the ratlungworm larvae gets on food, like unwashed vegetables, or when someone/thing eats an infected snail. The disease can also be transmitted by drinking from a garden hose that happens to have larvae in it.

So stop drinking from the hose. 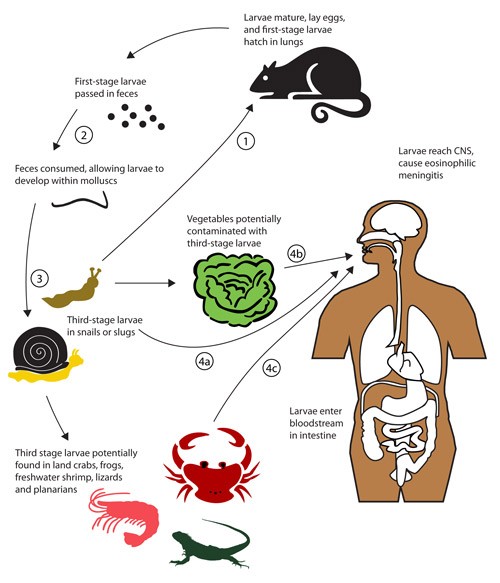 The study, which was a joint effort with the University of Florida and the Florida Museum of Natural history, suggests that the worms typically stay in tropical environments, but are now spreading to more temperate regions.

"The parasite is here in Florida and is something that needs to be taken seriously,” said lead author Stockdale Walden in a statement. "The reality is that it is probably in more counties than we found it in, and it is also probably more prevalent in the southeastern U.S. than we think. The ability for this historically subtropical nematode to thrive in a more temperate climate is alarming."

So far, Angiostrongylus infections have been detected in Hawaii, California, Alabama, Louisiana and, of course, Florida. Here in the Sunshine State, traces of the disease were found in rat poop from 18 counties, including Orange County.

"Rat lungworm is finding a whole new pool of animals to infect," said study co-author John Slapcinsky. "The more species it infects, the larger its population can be, which could make transmission even easier."

The study goes on to say that more than 2,800 cases of human infections have been documented worldwide, however this number is likely to be higher because the disease is often misdiagnosed.