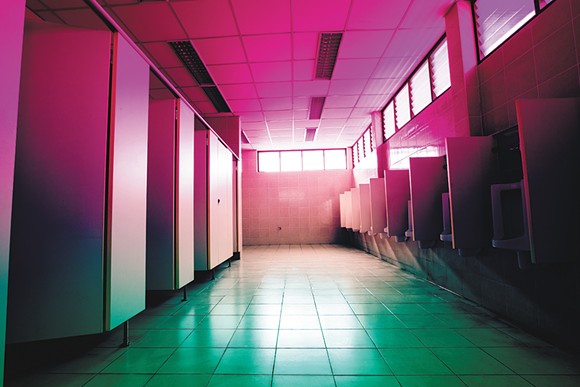 A transgender teenage boy is suing the St. Johns County School Board after his Ponte Vedra High School told him he couldn't use the boys' restroom.

Drew Adams, 16, began expressing his gender identity at Allen D. Nease High School since 2015, according to Lambda Legal, the organizations representing Drew and his mother Erica Adams Kasper. As a freshman, he used the boys’ restroom without any problems until someone anonymously reported him. School officials told Drew he could only use the building's gender neutral restrooms, an action which Lambda says "treats him as unfit to share communal facilities with others."

"When most kids use the bathroom at school, they don’t think too much about it," Drew writes a blog post for Lambda. "But now when I use the bathroom at school, I have to plan ahead. Sometimes, I have to miss chunks of class time to get to and from a bathroom that I’m permitted to use. I’m forced to watch how much fluid I drink during the day so that I can go as little as possible."

Drew, an honor student who wants to attend medical school, writes that he felt alienated and isolated from his classmates. He says he just wants to be treated like any other student.

"I’m a boy, but on my school campus, I can’t use the boy’s room," he writes. "It's embarrassing and humiliating to be singled out as different – as not equal, as not normal – especially by those who are supposed to support me and help me succeed in school."

Lambda filed a federal discrimination lawsuit against the St. Johns County School Board, arguing the district's policy is unconstitutional because it discriminates based on sex, which is protected under the 14th Amendment and Title IX education laws.

"St. John County School Board’s discriminatory restroom policy sends a purposeful message that transgender students in the school district are undeserving of the privacy, respect and protections afforded to other students," Lambda says in a statement.

The Florida Times-Union reports that St. Johns County school officials "disagree with the plaintiff’s interpretation of the law."

"Beyond that it would be inappropriate for us to try this case in the media," Superintendent Tim Forson said in a written statement provided to the Times-Union. "We had no knowledge of the complaint filed today before a press conference was held. We will work through the legal process with our school board and its general counsel."