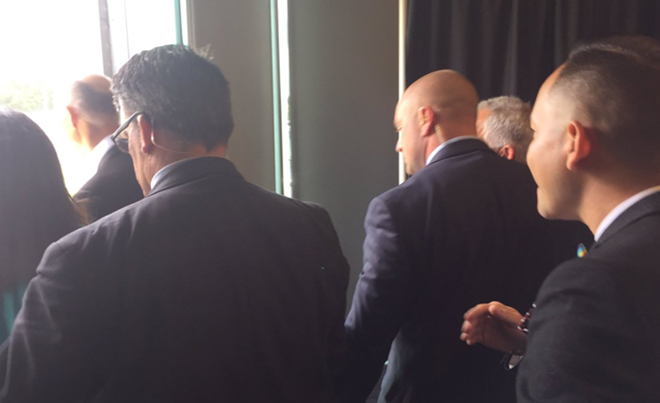 State Rep. Carlos Guillermo Smith says Florida Gov. Rick Scott "ran away" from him at an event Friday after Smith tried to ask Scott about signing an executive order that would protect state employees against anti-LGBTQ discrimination.

Smith, D-Orlando, and other LGBTQ advocates in Florida say days after the massacre at the gay nightclub Pulse, Scott's staff promised to sign the anti-LGBTQ discrimination order protecting state hires. At the time, the governor was being criticized for his history on LGBTQ issues and for refusing to acknowledge at first that the attack targeted the gay community. After more than a year of back and forth, Scott hasn't signed anything, which advocates say makes it clear that Scott had no intention of keeping his promise.

At an event for the Orlando Police Department and the Central Florida Urban League on Friday, Smith says he was going to ask Scott what more advocates could do to get him to sign the executive order once and for all. After Scott spoke to the media, Smith says he approached him to ask his question, but instead the governor quickly walked away from him.

@FLGovScott just refused to talk + ran away from me. I guess he can't face his broken promises to the LGBTQ/Pulse community. Sad! #Sayfie pic.twitter.com/Tuwh64rRSR

Totally unprofessional and violation of protocol from one elected to another.

Smith says a reporter had already asked the governor a similar question before he approached Scott. Smith, who is one of the few openly gay lawmakers in the Florida Legislature, says in a message that he felt betrayed.

"I feel betrayed that his team would string our community along with promised action to protect LGBTQ people from discrimination," he says. "Now, I feel personally disrespected that he would run away and refuse to speak to an elected lawmaker simply because he can't face his broken promises. It's really sad."

Orlando Weekly reached out to the governor's office for a comment, but has not received one as yet. (We'll update when/if we do.) Previously when asked to respond to LGBTQ advocates who accused Scott of breaking his promise, a spokesperson for his office said in a statement that "Florida is a state that does not tolerate discrimination of any form. In accordance with federal guidelines, Florida state agencies do not discriminate on the basis of sexual orientation, and state employees should not be discriminated against in any way. Our office will continue to review ways we can work to eliminate discrimination of any kind."