Band of the Week: Acoqui 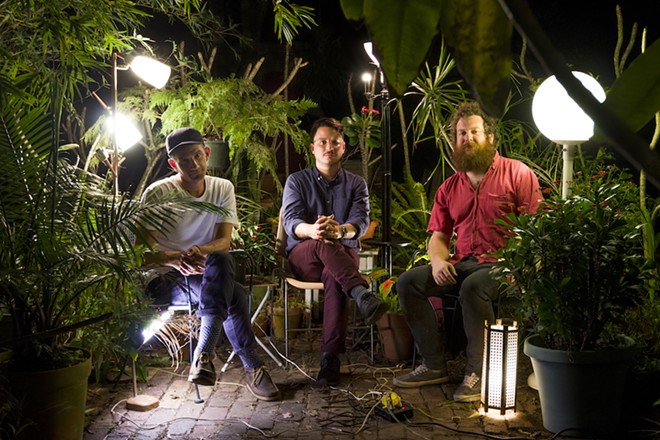 Welcome to Orlando Weekly's "Band of the Week." Every week, we highlight one of our favorite local bands. This week, we're pleased to bring you Acoqui.

Acoqui is playing Will's Pub on July 8 with the Woolly Bushmen and MrENC.

Who's in the band?
Tyson Bodiford plays the drums, Aaron Borowicz plays the bass guitar, and Steve Head joined in several months ago and plays guitar. I sing and play the guitar.

Our good friend Curtis Brown flew in from NYC and contributed guitars on 6 of the 10 songs on the new album and really helped take those to a another level. The talented Julian Lynch of Real Estate played alto saxophone on “Adults/Puppets” and sang backups on a song called “Trigger Flower”. I played piano and other instruments on the album, Aaron played some synth, we all tinkered with the insane amount of gear like kids in a candy store – basically we all can play different instruments and probably will want to utilize that whenever we're recording, but those are our core instruments up there.

When did the band form?
Acoqui technically started in 2011 as a solo project, guitar loop-based ambient-leaning tunes, mostly as a means of meditative catharsis for myself. From that year onward, I wrote and recorded tons of demos at home under that moniker, like hundreds of ideas for songs. I eventually started to sift through all these songs and picking out some of my favorites with the idea of making an album.

Near the end of 2014, I realized I had a good batch of tunes and producer Chris Koltay told me he was on board to record them at his studio in between his worldwide tours running sound for Deerhunter and The War on Drugs. At the same time, I also realized that I wanted to incorporate more instrumentation and needed to form a live band.  That’s when the other members came into the picture. So really, 2015 is when I truly feel this “band” started to form. Shortly after I flew out to Detroit for the first time, along with some of my favorite musicians (who also happen to be some of my best friends) and began recording the debut album with Koltay that is finally coming out.  Since Detroit, it’s evolved into something really special, something we all feel very fortunate to be able to do. And I’ve certainly opened up much more to the idea of it being collaborative with my bandmates – in terms of writing and arranging –because we’re feeding off one another so nicely. It may sound cheesy to say, but I don't care because it's true – it's become more than just a band.

Currently available releases:
The debut album A Heart Fills This Way will be released digitally on July 7th, 2017.  It will be available on Apple Music and Spotify and all that stuff everyone uses these days.  But we love Bandcamp, so you can get it there too! http://acoqui.bandcamp.com  Three singles are currently out from it if you read this before 7/7/17.  (We love LPs and hope to have it available on vinyl by the end of the year, too.)

What has been your most memorable show so far?
We played a show at Stardust in 2015 after we finished recording the majority of the album, that was super fun.  The crowd and vibe was good, no one had heard anything off the album before, but everyone was super receptive to the music.

Which local band is your favorite one to play a show with?
We've really been staying under the radar in terms of playing local shows while this album has been in the works.  But we are really excited about the two bands we’re playing with for the album release show on July 8th, The Woolly Bushmen and MrENC.  Solid people and solid musicians.

What description gets used for your band that you would most
like to correct people on? Why?
I dunno.  Everyone is entitled to their opinions about what it sounds like, so don’t pay much attention or care too much.  I guess sometimes when I hear folks say “Oh, so like, there isn’t really vocals, right? It’s more, like, ambient?” it can feel like a lazy description.  Only because I do sing and I do care a lot about what I have to say in these songs.  I think folks that pay closer attention to what we’re doing will start to understand that we often decide to just let the music do the talking whenever it’s appropriate.  But that assessment is somewhat justifiable because there are ambient roots to this project and even two songs on the album are interludes with no vocals at all.  So, touché!

What's your favorite thing about being an Orlando band?
The weather and the people.  And the food.  And the crazy deals on gear that Aaron finds at estate sales and on Craigslist!  Aaron's house where we rehearse is pretty much a music museum, a living testament that tons of great gear lives right here in Orlando or nearby.  Koltay (who recorded and mixed the album in Detroit) is always raving about all the great gear on the cheap in Florida and actually found me a killer '70s Yamaha Electone organ for a steal on eBay, which I ended up buying from a fisherman in Hernando Beach.  I've been writing new songs on that thing this past year.  (I later discovered that Koltay found a similar one on eBay for Kurt Vile too, which he also bought.)

What’s your least favorite? Why?
The reaction some people have when you say you’re from Orlando or just from Florida in general. Just because these people really have no idea how much cool shit is going on here creatively.  That said, I do think there is some room to grow when it comes to our venues and studios – moreso the centrality of it all. I’d love to eventually see things get to a point where bands not only want to tour here more, but that there’s more people coming here to record music.

Any big news to share?
SEVEN SEVEN SEVENTEEN. Our debut album is finally coming out on that date and once again, it’s titled A Heart Fills This Way.  Be sure to add it to your Apple Music or Spotify or whatever and share it with your friends.  I hope that you love it and that you want to listen to it a lot.  In other big news, our drummer Tyson just became the proud father of a beautiful baby girl named Penelope.

The Heard acoqui band of the week