Disney recently announced that the famous auction scene in Pirates of the Caribbean is being scrubbed of the human trafficking theme, and instead will now  feature the auctioning off the townspeople’s valuables.

The central character in the auction scene currently is the "red head," who the famously proclaimed "we the redhead." Well, it looks like they’ve got her. Now instead of being a soon-to-be sex slave, she’s now a pirate.

The animatronic will be holding a gun and a large bottle while putting one foot a barrel, in a pose similar to that of Captain Morgan. The red head pirate animatronic will also be featured in an updated version of the boat ride in Disneyland Paris. 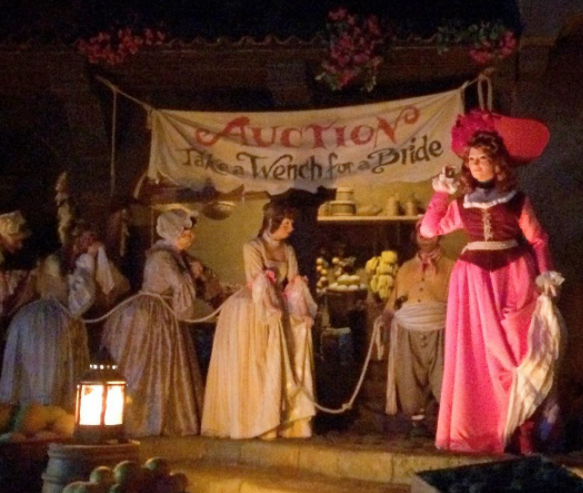 Senior Vice President Imagineering Kathy Mangum explained some of the thoughts behind this update. “Our team thought long and hard about how to best update this scene. Given the redhead has long been a fan favorite, we wanted to keep her as a pivotal part of the story, so we made her a plundering pirate! We think this keeps to the original vision of the attraction as envisioned by Marc Davis, X Atencio and the other Disney legends who first brought this classic to life.”

Marty Sklar, International Ambassador for Walt Disney Imagineering and a Disney Legend, weighed in on the changes as well. “To me, the Imagineers are simply reflecting what Walt started the day Disneyland opened – making changes that create exciting new experiences for our guests. I can’t think of a single attraction that has not been enhanced and improved, some over and over again. Change is a 'tradition' at Disneyland that today’s Imagineers practice – they learned it from their mentors, many of them Walt’s original team of storytellers and designers – the Disney Legends.”

Sklar, who has been at Disney Imagineering since 1961 (back when it was called WED Enterprises) continues; “Pirates of the Caribbean has always represented great Disney Park storytelling; it has set the standard for the theme park industry for half a century! But it’s a story you can continue to add , with great characters in new ‘performances.’ That’s what the Imagineers have done with this new auction scene – it’s like a show with a new act.”

The new scene sits just across the ride path from another scene that some have pointed out as a potential nod to human trafficking. A line of men tied together with what looks to be a guy being tortured in a water well. That scene has no signage indicating that this is, in fact, a human auction.

The Paris version of the ride will also receive a Captain Barbossa animatronic, and the Blue Lagoon Restaurant there will be rebranded as Captain Jack’s. According to the Disney Parks Blog, “It seems that Captain Jack won the restaurant in a wager and is now welcoming pirates of all ages to relax over a drink and hot meal. The interior of the restaurant has been re-themed and the establishment has been staffed with a fun-loving band of pirates.”

Pirates of the Caribbean first opened at Disneyland in 1967. It came to the Magic Kingdom in 1973 after many guests demanded the ride during the first two years the Magic Kingdom was open. The 1967 version in Disneyland is the last ride that Walt Disney has a direct role in designing. It opened just three months after his passing.

Over the years we’ve seen numerous updates to the iconic boat ride, including the addition of Jack Sparrow audio animatronics in all but the Paris version of the ride. Here in the States, other changes have included changing up a scene where pirates chase women. Originally the scene had the pirates chasing women in circles, then the scene was updated to have women chasing the pirates before going back to the pirates doing the chasing, but the women then had jewels. Now the women chase the pirates with broomsticks and other domestic items being used to fight the pirates.
We’ve also seen the talking skull towards the beginning of the Magic Kingdom version of the ride come and go over the years. It made a comeback last month. The talking skull is now timed with a flash of lighting that hides an on-ride camera moment, the photos of which can be viewed through the PhotoPass app linked to guests MagicBands.

Other changes to the attraction included the addition of a smoke scene which features a video of Davy Jones, in water video effects showing mermaids swimming past the boats, and the tattooed talking parrot animatronic that used to sit near the entrance of the ride.

No word on any updates to the Tokyo Disneyland version of Pirates of the Caribbean and the Shanghai version is nearly an entirely different ride with very little similarities to the other versions of the ride. Disneyland Paris will receive the updated auction scene on July 24 with Florida and California having no specific date, but both will be getting the update sometime over the next year.