Now's your chance to own a piece of Artegon Marketplace 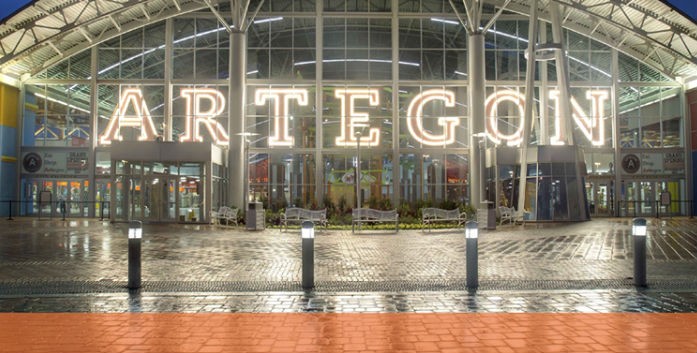 Artegon Marketplace might be gone, but that doesn’t mean you can’t relive the memories of the dead mall thanks to an upcoming auction.

Jay Sugarman Auctions will be holding two days of auctions, July 13 and 14, for the various equipment, props, and other items left behind from the failed mall.

Artegon, known as "the anti-mall," featured highly themed kiosks for its vendors along flea market-style pathways. Open for less than two years, Artegon went through a number of reinventions over the years since first opening as Festival Bay in 2002.

Artegon opened in 2014 with cage like vendor booths, but the cages were quickly replaced with themed kiosks that matched the type of merchandise being sold in each. The flea market mall closed abruptly earlier this year sparking rumors of a new theme park-anchored resort to be developed on the highly desirable property.

The upcoming auction shows both the Artegon items and fixtures that date back to the opening of Festival Bay. Sugarman’s site says “Selling All Remaining Assets By Public Auction 400,000 Square Foot Indoor Mall.” The large round retro like original Festival Bay lighting is shown on the auction site along with numerous holiday decorations.

Also listed as part of the two days of public auctions are the assets left behind at Toby Keith’s I Love This Bar and Grill. Toby Keith’s Orlando location closed in July 2015 after being open less than seven months. The bar’s closure was part of a larger downsizing of owner Boomtown Entertainment, which was in significant financial troubles at the time.

Toby Keith locations in Michigan, Minnesota, Texas, and California all closed around the same time. The Artegon location has sat empty ever since. The auction will include nearly everything at Toby Keith’s that isn’t attached to the building, that includes most of the dining room furnishings, neon signage, and the kitchen equipment.

The auctions, which will take place at Artegon, begin at  both days, with previews starting at While some items will be offered in the virtual auction, it's recommended to be at the live auction for the best bet at the items.

The anchor stores, such as Bass Pro Shop and Cinemark Theaters, are still open and not part of the auction.