Ivanhoe Village bar the Lucky Lure has a weekly live music series. You’d be forgiven for being unaware of not just that but of anything music-related in this hood. Despite being a strip that’s both maturing as a nighttime destination and so close to the music-centric Mills Avenue, it boasts precious little live music. Besides perhaps some of the music offerings at the Imperial or the random haps at the Caboose – and even those are a stretch – there’s not much to follow. But Thursdays at the Lucky Lure is maybe one to watch if you want a little live with your chill. 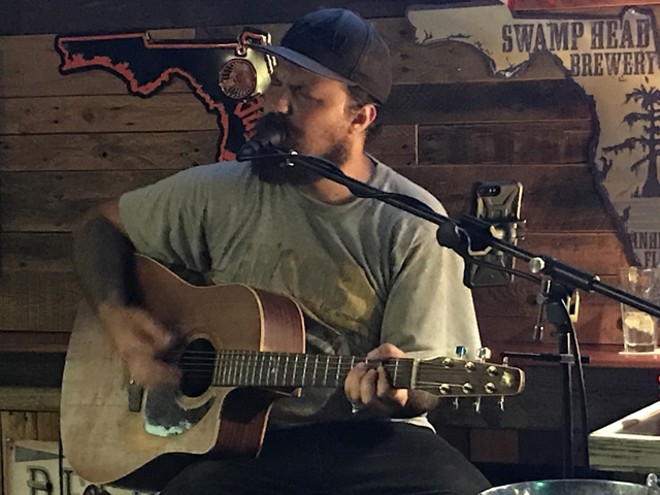 A recent one, for instance, featured Thomas Wynn, probably the city’s most respected Southern rocker. He and his band the Believers just recently released a powerful new album (Wade Waist Deep), their first as a label-signed act. And this night, though solo and more subdued than his full stage show, he played and sung with the kind of deep and resonant soul befitting a man of his cachet.

From what I could trace, the live offerings won’t always have quite as much prestige or caliber as Wynn, whose band typically pack out prime venues like the Social. But this Thursday night stand isn’t just some local-yokel open mic. Wynn is a fairly regular feature, and past performers include notables like Lauris Vidal, Beartoe, Sean Holcomb (The Holcomb Brothers), Hannah Harber, Drew Yardis and Joseph Martens (Hindu Cowboys). You can’t argue much about taking in some decent live music in a laid-back, open-air lakeside spot like the Lure. Besides, you won’t hear Thomas Wynn cover the Yeah Yeah Yeahs at one of his big gigs.

On an operational note, though, it would be far more dignified if the performers were situated where they didn’t occupy the same space as drunk pool players. It’s not a good look when a performing Wynn and a woman trying to get an angle on the cue ball have to maneuver like they’re locked in a game of Twister.

Still, the Lure’s live Thursdays are a good – no, needed – infusion that adds some pulse without disrupting the relaxed vibe of a great neighborhood.