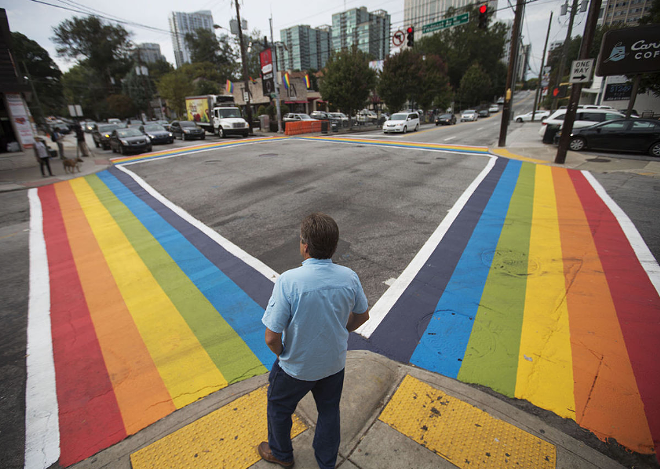 An online petition is asking City of Orlando officials to install rainbow crosswalks at the intersection of Kaley Street and South Orange Avenue, steps away from the gay nightclub Pulse.

The petition on change.org, which currently has 1,179 signatures, says the crosswalk would honor the 49 victims who died in the massacre at Pulse on June 12, 2016 and recognize the struggle of survivors. The crosswalks would be similar to those installed in several cities, including Atlanta. Atlanta Mayor Kasim Reed announced on the first-year mark of the Pulse massacre that the Georgia city would install the crosswalks as a way to "reaffirm our unwavering and unqualified support for our LGBTQ residents," according to the Atlanta Journal-Constitution. Last year, the bandshell at Lake Eola Park in downtown Orlando was painted in rainbow colors.

"It is only fitting that the intersection of Orange and Kaley bear a similar commemoration as it has become a crossroad to the world with thousands of visitors from around the globe continuing to visit the Pulse memorial site to pay their respects," the petition says.

Orlando city staff is looking into the petition and is currently researching color and art treatments for crosswalks in general, says Cassandra Lafser, spokesperson for Orlando Mayor Buddy Dyer's office. Any discussions regarding rainbow crosswalks would have to involve the Florida Department of Transportation, as they have the ultimate authority over crosswalk marking according to state statue.

"Part of this evaluation involves ensuring safety and visibility and researching things like possible treatments, maintenance and costs," Lafser says in a statement.