While the Magic Kingdom and Epcot got plenty of love Hollywood Studios didn’t go without at Disney’s D23 convention.

Fans were treated to more details on Toy Story Land, including an official opening period, Summer 2018. While this is extremely vague, it’s believed that Toy Story Land should open towards the beginning of summer, possibly as early as April 2018.

Disney is purposely very vague with the timeline for now, as they finish construction and begin testing the various rides. The land will include a new entrance into Toy Story Mania, and will feature two new rides; a Slinky Dog-themed family coaster and a Tea Cups-style Little Green Men Alien-themed spinning ride.

We also got more details on the upcoming Star Wars Land, which Disney confirmed will be known as Star Wars: Galaxy’s Edge.

The Disney Parks Blog shared a video of the model for the new land, which will be themed to a new to planet on the edge of the Star Wars universe.

Many of the details discussed at D23 were previously announced but we did get a few amazing new details. The Millennium Falcon ride will have six guests at a time in the cockpit of the space ship. Each guest will have a role to play and how they meet the requirements of that role will affect how various characters throughout the land will treat them.

Disney unveils incredibly detailed model of 'Star Wars' land
By Colin Wolf
Blogs
Bob Chapek, Walt Disney Parks & Resorts Chairman, said: “The scale of this attraction is unlikely anything we have ever done before.” Aerial images of the construction at both the Anaheim and Orlando Star Wars: Galaxy’s Edge lands show a large ride building where life-sized At-Ats are being constructed. The ride will have guests placed in the middle of a battle while they navigate a star destroyer space ship.

Scott Trowbridge, the Imagineer leading the Star Wars expansion plans, shared details on the former droid that Disney fans are well aware of. Rex, the droid that was previously featured on Star Tours, has a new job on the Galaxy’s Edge. He’s now a DJ, and things don’t go well for him. Rex will be DJing at the cantina that Disney has previously confirmed for the new land.

Blue milk was also confirmed as a specialty drink featured in the new land. 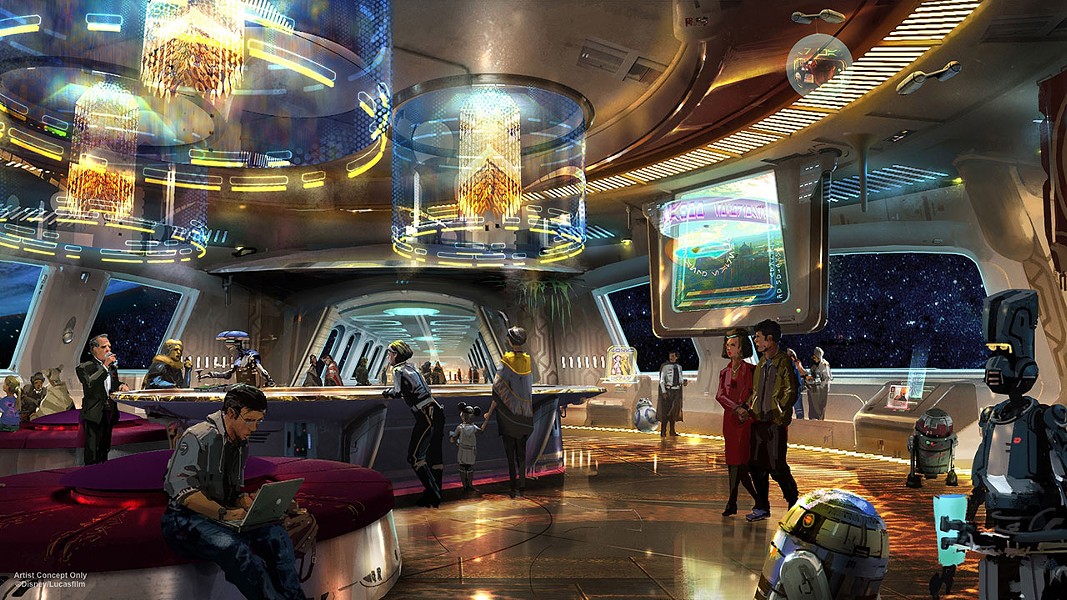 The biggest news coming out of the Star Wars segment of the Parks and Resorts panel was the confirmation of a Star Wars-themed, fully immersive multi-day resort.

This yet to be named resort will allow guests to be fully immersed in the Star Wars universe for days at a time. Ran similar to a cruise ship, the new resort will feature evening and morning entertainment offerings while the midday will be set aside to allow guests to explore the Star Wars: Galaxy Edge land. Guests will be given Star Wars themed clothing to wear, and each will be given a somewhat custom mission to accomplish while staying at the star ship themed resort.

Chapake explains what the new resort will be like; “From the second you arrive, you will become a part of a Star Wars story. You’ll immediately become a citizen of the galaxy, and experience all that entails, including dressing in the proper attire. Once you leave Earth, you will discover a starship alive with characters, stories, and adventures that unfold all around you. It is 100 percent immersive and the story will touch every single minute of your day, and it will culminate in a unique journey for every person who visits.” 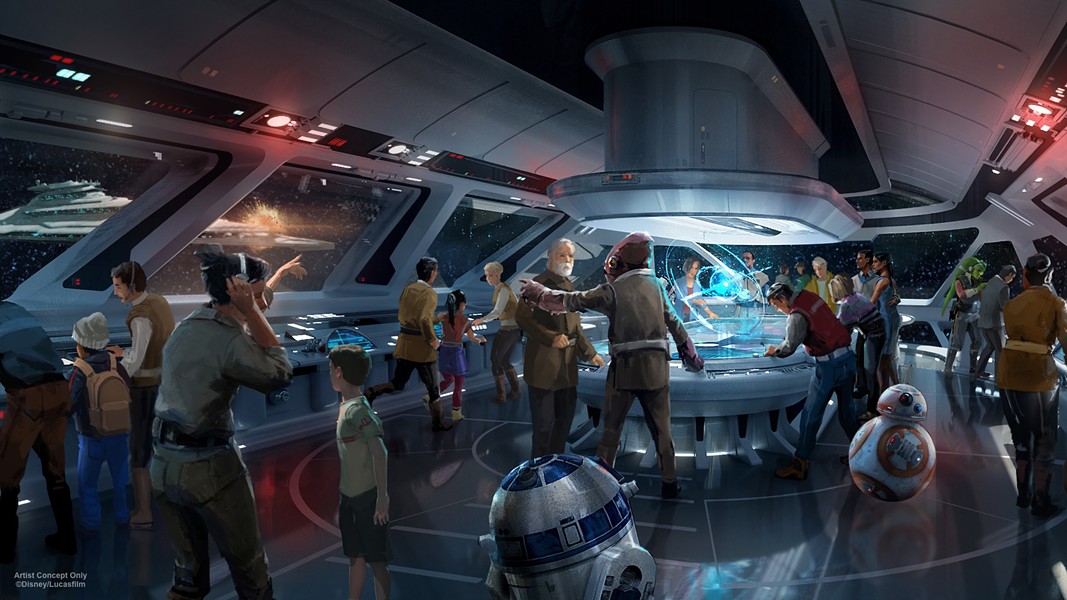 Chapek confirmed that every "window" in the new resort will look out onto the space that the "star ship" is traveling to. An entry-style system, similar to that of the "elevators" at Gringotts will "transport" guests to the "star ship" resort. Once they arrive at the resort all connections to the outside world are removed, including all windows, all non-themed interactions, and all non-Star Wars based themes.

Chapek called the new luxury Star Wars themed role-playing resort Disney’s “most experiential concept ever,” he went on to say “It’s unlike anything that exists today” and “it will stand out amongst all the resort around the world and will make an incredible addition to Walt Disney World.” Many have compared the new resort as similar to the ‘resort’ found on HBO’s WestWorld.

Another long-rumored attraction was also confirmed by Chapek. What was known as ‘The Great Mickey Ride" by fans was confirmed by Chapek and will officially be known as “Mickey and Minnie’s Runaway Railway.” Disney confirmed that it will also feature what they’re calling “Two and a half D,” or glasses free 3D. The cutting edge newly created system using the latest in projection technology with various surfaces that can adjust their shape. A video showcasing the new technology featured a forest scene with multiple flat surfaces that quickly flipped while the projection technology shifted the image to one of a city resulting in an effect that looked like the entire room turned inside on itself moving the guests from a forest setting to a city setting in mere nanoseconds.

Mickey and Minnie’s Runaway Railway will use the Mickey Mouse cartoon styling seen in the Mickey shorts that play on the Disney Channel. The artists from those shorts are assisting with the new ride in both the animation and the sound stylings. According to various industry insiders, the new ride will be roughly eight minutes long and will feature a cutting edge trackless ride system. Disney compared the new ride to other ambitious attractions created by the company, such as Pirates of the Caribbean, the Haunted Mansion, and it’s a small world. Not only will the new Mickey Mouse ride include a similarly impressive level of detail it will also include a catchy new sing-able theme song.

This is the first ride for Mickey Mouse and will feature more hidden Mickeys than any other ride.

Disney confirmed that the new Mickey ride will replace The Great Movie Ride, which will close permanently on August 13. The queue will likely use the pre-existing Great Movie Ride queue. Guests will begin with watching a Mickey Mouse short before they board a ride vehicle and step into the cartoon itself.

Disney also confirmed the Disney Skyliner sky gondola system that will link from the front of Hollywood Studios to four nearby resorts and to Epcot’s International Gateway entrance.