It’s no secret that house shows happen in Orlando’s indie and punk scenes. What’s more arcane, however, is that it’s also happening in the art-music scene. 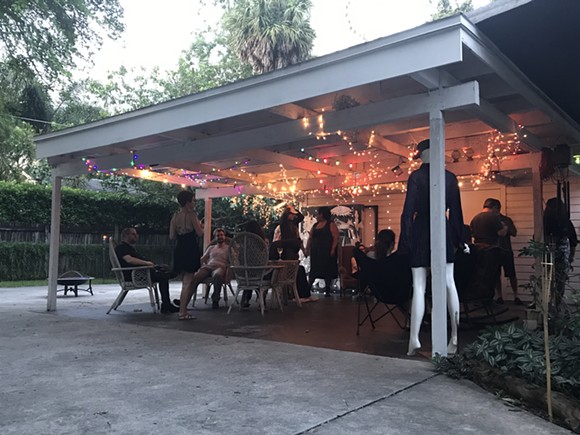 The Guava Tree Gallery is one such example. Despite the formal name, it’s actually a private home in a SoDo neighborhood around the corner from 903 Mills Market. But every third Friday, it transforms into an ad hoc art space and opens to the community for a free monthly gathering. The Timucua White House, it seems, no longer has a monopoly on arty house shows. The latest was a combined affair. In a blacked-out front room, a stark and evocative film by UCF associate film professor Christopher Harris was screening on a 17-minute loop. In the living room, the music feature was the Baker-Barganier Duo, an experimental classical twosome from St. Pete. Elizabeth Baker – whom I first encountered at the In-Between Series in an actual full-time gallery (Gallery at Avalon Island) – is a modern pioneer of the toy piano. In fellow experimentalist Erich Barganier, she has a multi-instrumental partner that expands the palette considerably while maintaining the same spirit of adventure. Between the two of them was a menagerie of curious instruments, a miniature orchestra of toy pianos, theremin, saw, drums and electronics. Even the more familiar instruments like the bass and mandolin were played unconventionally with bows and slides. Their work – much of it debuts of esoteric interpretations of slave songs – were studies in tension, accord and modernity.


But it’s the phenomenon of the event itself that says something of particular note about the city’s cultural fabric. Between the cross-media things that the Timucua White House, the In-Between Series and, now, the Guava Tree Gallery are doing, it’s great to see a fuller embrace and integration of music by Orlando’s art scene. And only great things can happen when it ups its DIY game like the Guava Tree Gallery. If you don’t think anything special is happening here, you’re not digging deep enough.