What's blue, yellow and is the newest symbol of our community? 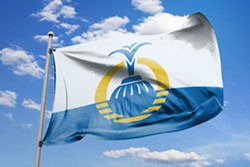 To celebrate, Orlando Mayor Buddy Dyer, commissioners and other city officials will gather next Monday, July 31, to raise the flag for the first time on Orlando's 142nd birthday. The flag-raising will be at 1 p.m. in front of City Hall at 400 S. Orange Ave.

The new flag is a blue-and-white design featuring the Lake Eola fountain between a large, golden "O." This flag is an update on a previous design submitted by artist Tim Eggert, a local graphic designer for the engineering firm Kimley-Horn.

"The water ascending from the fountain represents the continuous flow of energy and innovation that makes Orlando a city on the rise," the city says in a statement. "The six equal segments on the base of the fountain embody the city's six commission districts. The iconic fountain is surrounded by the letter 'O,' which symbolizes Orlando's unity, connectivity and timelessness. The color yellow represents the sunshine, hope and happiness that thrive in our great city. The reflection of the "O" in the water symbolizes our careful consideration of our past and our bold vision for the future. The flag is set on a two-toned background of blue and white representing patriotism, perseverance and peace."

Designed by our community. Approved today by City Council.

The city received more than 1,100 submissions from locals and artists all over the world when it started its flag design contest in February. After four months of public input and committee meetings, a flag design panel narrowed down the potential flags to four designs and directed artists to do some modifications, including Eggert's original design, which some said looked more like a whale tail. At Monday's meeting, Commissioner Patty Sheehan said she was voting against the flag because she thought it could be more consistent with the rest of the city's public branding and could indicate more clearly that it's from Orlando.

Orlando's current flag was adopted by the city council in 1980 and depicts the Lake Eola fountain and several unidentifiable buildings. It was created through a design competition sponsored by the Orlando Kiwanis Club and the Council of Arts and Sciences.