Snooty the manatee dies one day after 69th birthday 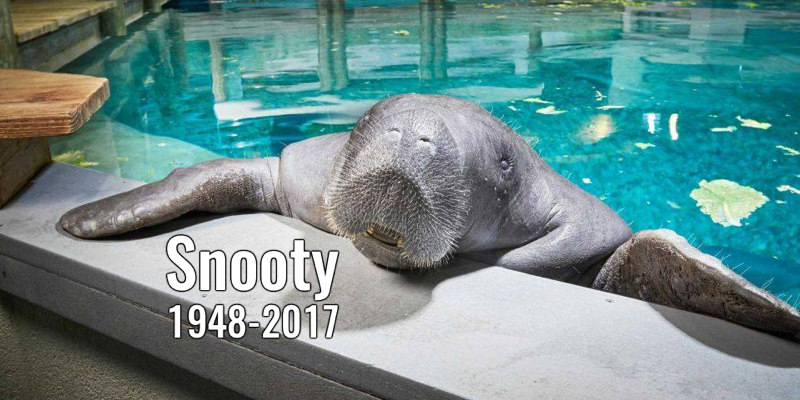 Snooty, the world's oldest captive manatee, died last weekend in a tragic accident just one day after his 69th birthday.

According to the Herald-Tribune, Snooty turned 69 on Friday, July 21, and celebrated with a birthday party the following day at the South Florida Museum, complete with a veggie cake.

However, in the following hours, Snooty and his tankmates, Randall, Baca and Gale, dislodged a bolted panel in their exhibit and swam into a narrow hallway used to access plumbing for the tank's life support system.

Randall, Baca and Gale, weighing between 500-600 pounds each, were able to pass through the hallway, but Snooty, who was more than twice their size, was not able to turn around and reach the surface for air.

The South Florida Museum is deeply saddened to share the news that our beloved Snooty has died. Snooty’s death... https://t.co/W2Tcq3Xs0T

"Our initial findings indicate that Snooty’s death was a heartbreaking accident and we’re all quite devastated about his passing,” said Brynne Anne Besio, the museum’s CEO, in a statement. "We’re reviewing what happened and will be conducting a full review of the circumstances. Snooty was such a unique animal and he had so much personality that people couldn’t help but be drawn to him. As you can imagine, I — and our staff, volunteers and board members — considered him a star. We all deeply mourn his passing. We are honored to have had him with us for so long and will continue his legacy through our manatee rehabilitation program."

Snooty was the first manatee to be born in captivity in 1948, and he lived at the aquarium since 1949, where he met millions of visitors every year. He was officially name the mascot of Manatee County in 1979.