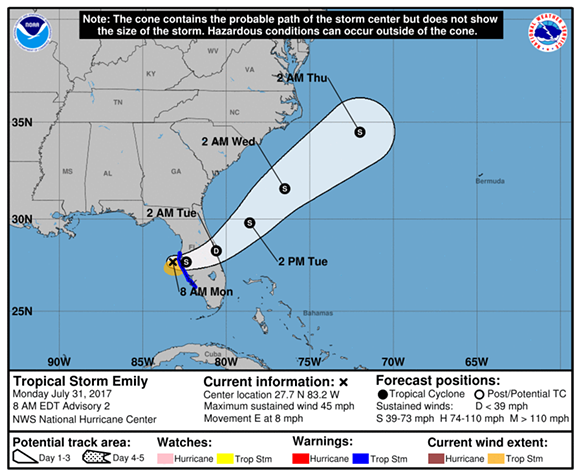 Gov. Rick Scott on Monday declared a state of emergency in 31 counties after Tropical Storm Emily formed in the Gulf of Mexico. Heavy rains and winds are expected across Central Florida the next two days, and tropical storm warnings were in place from the Anclote River near Tarpon Springs to Bonita Springs. “While this storm developed quickly overnight and will swiftly move across our state, storms can always develop rapidly and that is why is it so important to be prepared at the start of hurricane season,” Scott said in a prepared statement.

At 11 a.m. Monday, Emily, with 45 mph maximum sustained winds, was about 35 miles southwest of Tampa. The system was moving east at 9 mph. The National Hurricane Center projected little strengthening of the system before landfall. “Emily is expected to weaken to a tropical depression while it moves across the Florida peninsula later today and tonight,” the National Hurricane Center reported in the 11 a.m. advisory.

I’ve declared a state of emergency in 31 counties in response to Tropical Storm Emily: https://t.co/VmOREXmqoN (1/3)

The governor's office reported that no evacuation orders had been given, while the Florida National Guard has been ordered to stand ready. With rain accumulations of 2 to 4 inches expected between the Tampa Bay area and Naples, and isolated amounts up to 8 inches possible, flood watches were in place for Lee, Charlotte, Collier, Hendry and Glades counties.