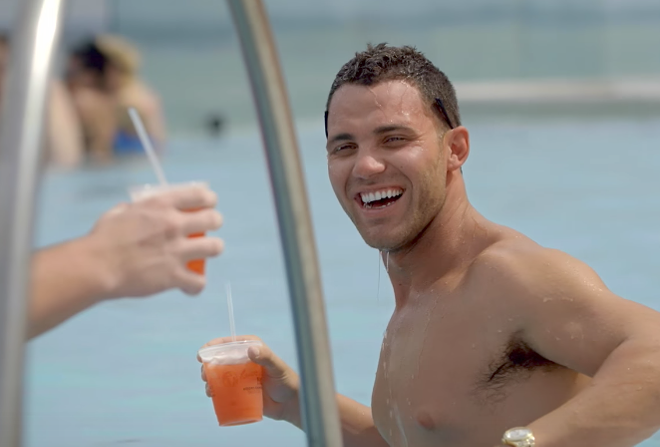 Tonight's watch party for the premiere of MTV's Siesta Key, a Florida-based reality show about rich millennials in bathing suits, has been canceled because of outrage surrounding a cast member's connection to one or more of the men in the now viral "shark-dragging" video.

According to CBS12, Monday's red carpet event at CineBistro in the Westfield Siesta Key Mall has been cancelled amid intense backlash from protesters threatening to crash it.

When news emerged that cast member Alex Kompothecras is friends with one of the men identified in the shark video, which shows a live shark being dragged behind a boat at high speeds, it attracted the attention of furious animal rights activists.

The protest is seemingly organized by Boycott Siesta Key MTV, a Facebook page that has gained almost 6,000 likes in the few days since its creation.

Let's overanalyze the new trailer for MTV's 'Siesta Key'
By Colin Wolf
Blogs
Days before the airing of the show, Kompothecras was being harassed online for being affiliated with one of the men. When someone called him out on his Instagram account last week, he responded that he didn't approve of his friend's actions. "I had absolutely nothing to do with the shark video. Yes he's a friend of mine, but no I don't agree with what he did." Check your facts before you go posting on my page. Thanks" he replied.

Sometime after the exchange, however, it seems that all of the comments on the post were deleted.

Though the viewing party is cancelled, the pilot will still air tonight at 10 p.m. EST.