The average seat aisle width at the Amway Center is a little over 12 inches. That's enough room to awkwardly stumble to your seat, accidentally slosh some beer on the passerby and sacrifice someone’s toes with your pumps before pretzeling yourself into place.

But that’s not what happens at a Prince Royce concert at the Amway. Here, 12 inches is too much room when couples are constricting the oxygen between their bodies with every four-count hip pop to Royce’s Spanglish bachata version of "Stand By Me." It’s so entrancing that you don’t mind when a bachatero twirls his dance partner and her hair into a whirlwind that finds its way into your face. 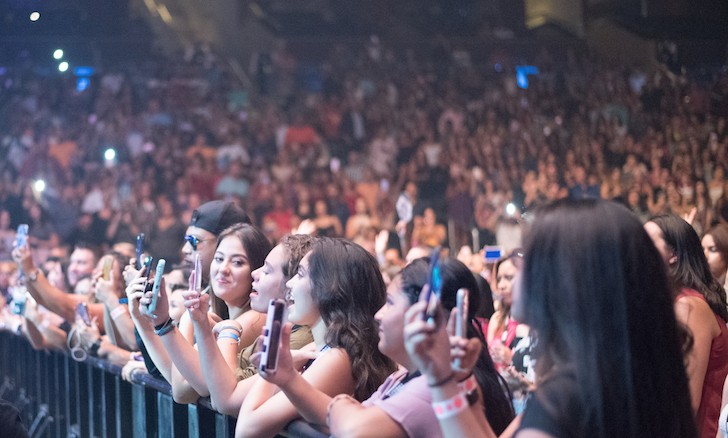 On stage, a glistening Geoffrey Rojas Royce, still with his shirt on at this point, crooned "Corazón sin Cara" and "Las Cosas Pequeñas" for his original die-hard fans, the hundreds of Latina teenage girls and young women who filled up the Amway and exhausted their lungs screaming at every dimpled Royce smile. In between songs, the bachata superstar threw sweaty towels and red roses into the crowd that were probably devoured by snatching hands into petals. “Buenas noches, Orlando!” the heartthrob yells with a twinkle in his eye that sets cardiac palpitations into overload. Unique, perhaps, to a Royce concert was a third demographic – the chaperonas, those mothers, grandmothers and aunts who accompanied younger girls and couldn’t help but indulge in the Dominican fantasy.

At one point, Royce jumped from the stage to greet the front row with a kiss on the cheek and caught a white-haired abuelita whose eyes rolled back when he planted a smooch. Those chaperonas who usually cover your eyes during the sex scenes of a telenovela were too busy watching Royce hump a microphone stand to do much of anything, really. Palpable envy gripped the front when the bachata superstar picked two women to go up onstage for a steamy rendition of "Dilema," a pop-bachata mix about a two-timing lover from Royce’s newest album FIVE. “You got a boyfriend?” he asks in a Bronx-tinged accent to one girl who traveled from Tennessee just to see him live. “Hell no!” she stammers. “I got you.” The second-hand embarrassment and giggles were worth it for the two ladies because they each get a peck on the lips and a rose that wasn’t reduced to a twig.

Toward the end, Royce, sans shirt now, is still full of energy, jumping and cartwheeling across the stage to the dancehall tune "Back It Up" with a video featuring him and Jennifer Lopez in flirtatious positions along with a Dale! cameo by Pitbull. The 28-year-old sounded like he could sing into the morning, but before midnight he returned to his romantic bachata roots with silken vocals on "Deja Vu" and "Darte un Beso." Royce left hearts fluttering in the night as he descended under the stage and a roaring crowd still dancing after his departure in the swirling, paper-confetti heat.