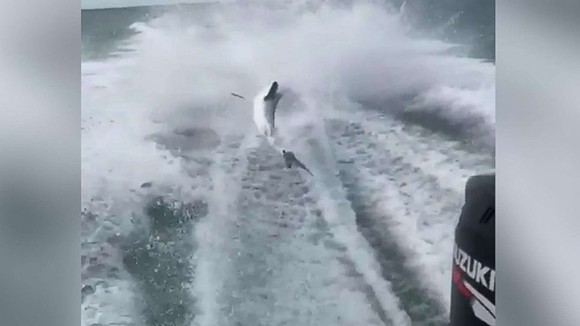 One of the Florida men associated with the disturbing shark-dragging video was previously investigated by federal wildlife officials in 2015 for an alarming set of photos that showed him gripping protected birds.

The Palm Beach Post reports the case was eventually dropped because although there were photos of the incidents, investigators with the U.S. Fish and Wildlife Service were "unable to establish venue or a timeframe when the photographs were taken, creating a possible issue with the statute of limitations."

Back in 2015, the Florida Fish and Wildlife Conservation Commission got a number of complaints about social media posts that showed a man mistreating birds, like the brown pelican and the cormorant, according to the Post. FWC officials took the posts to USFWS wildlife officials for joint investigation. Eventually, federal officials determined the man pictured had violated the Migratory Bird Treaty Act seven times. When investigators tried to interview one of the men pictured, he requested his attorney.

MTV's 'Siesta Key' watch party cancelled because of connection to 'shark dragging' video
By Kristin James
Blogs
After the shark-dragging video went viral last month, Florida wildlife officials began investigating the men involved, but they have not identified them publicly, though their names have been widely disseminated on social media. One of the men asked local officials for increased police patrols at his Palmetto home because of death threats.