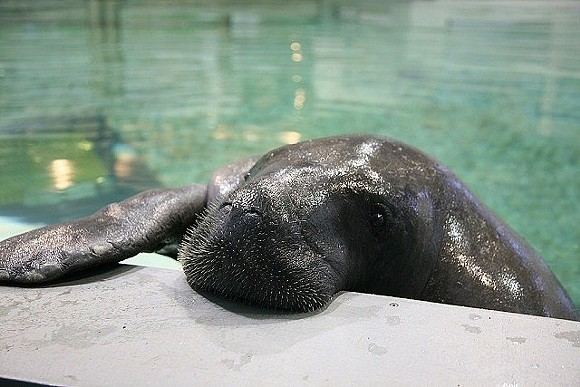 Florida Voices for Animals, an animal rights non-profit organization based in Tampa Bay, is holding a "Justice For Snooty" protest tomorrow afternoon.

On July 23, Snooty died in captivity at the South Florida Museum when he swam into a plumbing compartment after a blockade was dislodged. He became trapped due to his size (1,300 lbs.) and he later drowned. Celebrating his 69th birthday only hours before his death, he was the oldest-known manatee in the world.

Florida Confederate monument could be replaced with statue of Snooty the manatee
By Colin Wolf
Blogs
South Florida Museum employees have come under fire as museum officials, including the Board of Trustees and CEO Brynne Anne Besio, are endorsing a thorough review of his death, The Ledger reports.

“Without facts, it is not appropriate to speculate or make any allegations,” the museum said in a statement. “When the review is complete and action steps are determined, the museum is committed to sharing the information publicly.”

Related Snooty the manatee dies one day after 69th birthday

Snooty the manatee dies one day after 69th birthday
By Colin Wolf
Blogs
FVA will send letters to the museum board calling for any employees involved in the incident to be removed.

“We can’t heal knowing the people whose negligence that killed Snooty still go to jobs and carry on like nothing happened,” Denise Anderson, a member of Florida Voices for Animals, said to The Ledger. “I don’t know why the board of directors is dragging their feet about this. These people need to go.”

Florida's oldest manatee, Snooty, enters Guinness World Records after turning 68
By Monivette Cordeiro
Blogs
The protest will be held outside of the South Florida Museum August 5 from 1 to 2:30 p.m.