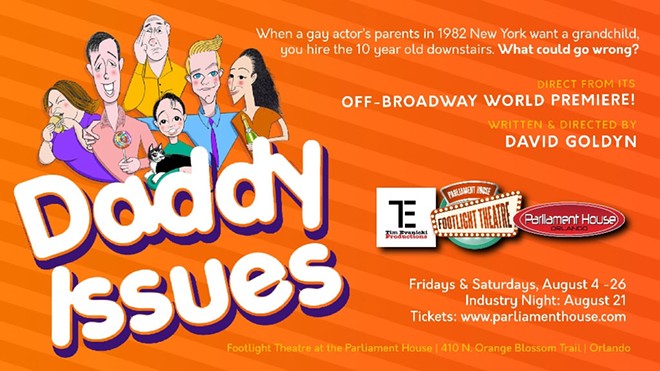 Parliament House producer Tim Evanicki has brought writer-director David Goldyn’s comedy Daddy Issues to Orlando direct from its 2016 Off-Broadway debut, and the ridiculous results are a treat no matter which team you play for.

Donald Moscowitz (Wes Miles) is a struggling actor in early-'80s Manhattan whose career mainly consists of failed callbacks for cat food commercials. His overbearing Jewish parents (Joe Zimmer and Wendy Starkland) seem surprisingly accepting of the fact that their son is a fagela, but they still don’t understand why his homosexuality should stand in the way of him settling down with a nice girl and having kids before Grandma Moscowitz (Jac LeDoux), who has been “dying for 10 years,” finally passes on. 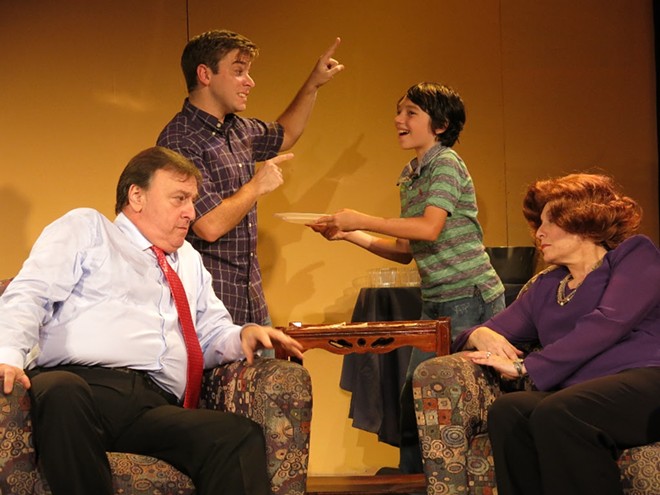 In an attempt to placate their procreative prompting, Don invents a son that he allegedly had with a college girlfriend, and schemes with his drag queen frenemy Levi (Tim Garnham) and fag-hag BFF Henrietta (Darby Ballard) to enlist a neighborhood kid (Rhyse Silvestro) to impersonate his offspring. Naturally, the boy’s mother (Melanie Leon) shows up at just the wrong time, and Donald’s deception dissolves during a farcical finale.

Goldyn’s snappy one-act is the rare show that would go over equally well in a gay nightclub and Miami retirement home. True, the plot strains credulity with its convoluted coincidences, and the motivations needed to justify Don’s ruse aren’t clearly established at the start. However, Goldyn’s cast bring so much energy to the stage that it’s hard to resist going along for the ride.

Designer Jaime DeHay’s living room set, which is more substantial than we’re used to seeing on the Footlight Theatre stage, effectively evokes the era, and the script is peppered with period references to poisoned Tylenol, Epcot Center and Phil Donahue. The biggest anachronism would seem to be Donald's parents' progressive embrace of his sexual orientation, but Zimmer (making a must-see return to the Orlando stage after returning from Japan) and Starkland are so spot-on in their operatic kvetching that you’ll likely laugh through any logical lapses.

Likewise, the same goes for every other member of this first-rate cast, from Miles’s mounting mania as his illusions unravel, to Ballard and Garnham’s wittily bombastic portrayals of their stereotypical sidekick characters, down to young Silvestro, who possesses sharper comedic timing than most actors twice his age.

With copious references to vaginal moisture, circumcision and hymens, the humor is a bit raunchier than a Three’s Company rerun, but Goldyn directs the play with the propulsive pace of a classic three-camera sitcom, as the Parliament House’s well-lubricated live studio audience provides the laugh track. If Daddy Issues were in NBC’s old Thursday-night lineup, it might run for six seasons, but it’s only in Orlando through Aug. 26; it would be meshugenah to miss it.