Despite spending millions on World of Avatar, the latest rumors point to major updates coming to Disney's Animal Kingdom

Back in 2011 when Disney announced plans for a new land at Animal Kingdom based on the Avatar film that came out two years earlier, it seemed like a sure bet for the fledgling park, which had struggled since it opened 13 years prior to rid itself of the idea it was just a zoological park. Avatar still holds the record as the highest grossing film of all time, but here in 2017, the film seems like a distant memory.

The numerous sequels to Avatar have been pushed back time and again, now with the second of four sequels scheduled to hit theaters in 2020. This put Disney in an odd predicament with its Avatar land at .

Focusing less on the film itself and more on the world of the film Disney attempted to create a unique land that would be a draw in and of itself. There was some attempt at also promoting the film linked to the land, a movie that Disney doesn’t own, but is found nearly any time of day or night playing in Disney World hotel lobbies and on WDW’s on-site hotel television channels.

A major media blitz, a massive advertising campaign, and numerous special events led up to the grand opening of Pandora – The World of Avatar earlier this summer. To offset the massive crowds expected for what is the largest expansion since Animal Kingdom’s opening in 1998, a new nighttime water-based show was planned on the opposite side of the park.

Rivers of Light faced numerous setbacks, pushing the opening date back by over a year and with multiple special effects being cut from the show. Finally opening earlier this year, the new show was widely panned despite some positive reviews early on as one of the weakest nighttime shows in Orlando.

Crowds did show up for Pandora, but early indications seemed to show lower than expected crowds and resort wide the numbers for the summer aren’t looking good at all. Disney has now begun rolling out numerous discounts for the rest of this year. did see a small uptick in the last half of July but with new attractions slated for literally every other WDW park those numbers are likely not to stay up.

To compete with all of these other additions and to help push the Animal Kingdom numbers up, Disney is now looks to be weighing numerous additional options.

Vulture, an offshoot of New York Magazine, reported that Disney has already begun planning a new sit-down restaurant and a third ride for Pandora.

With the second installment in the cutting edge 5-film series coming out in 2020 and the third in 2021 Disney could be planning to have a joint marketing campaign between the new films and a new expansion at Pandora. While it is possible that Disney could build a new ride in that time frame. a more likely scenario is opening these two expansion plots at different times with the restaurant coming online first. A new sit-down restaurant in Pandora would allow also help address some of the capacity issues that will arise if the rumored Club 33 take-over of Nomad Lounge, which is just outside of Pandora, is realized.

Disney is expecting the largest crowds in the history of the resort heading into the 2021 WDW 50th Anniversary, so more dining may likely be needed in .

Not all of the expansions at are focused in Pandora. Across the park near the seating areas for the nighttime show, Dinoland’s mini land Chester and Hester's Dino-Rama was used as a quick fix to address the complaints of a lack of family rides at the theme park. Two off the shelf rides and numerous games fill an area themed to a parking lot taken over by a roadside carnival run by a couple of gift shop moguls.

Originally this area was supposed to be home to a large family friendly wooden roller coaster, The Excavator, which would be a mix between Big Thunder Mountain and Coastersaurus at Legoland Florida. But the parking lot themed area opened in 2002 to give the animal park more theme park style areas. 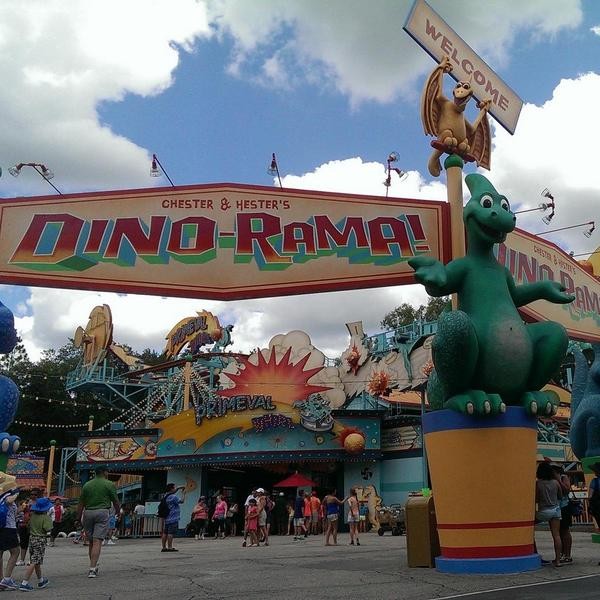 WDW Theme Parks, a rumor and news site that tracks Walt Disney World stories, has begun tracking changes coming to Dinoland. Industry insiders seem to point to the Dino-Rama area being closed within two years for a major new update. This update would likely not be a part of the 50th Anniversary but would open just after it, but certain aspects of the update may open earlier.

It's likely that the update would include new guest paths connecting Dinoland and the Asia area of the park. The walkway between the two areas floods with guests each night when Rivers of Light lets out. Stand by for the show also lines up on part of the pathway. The Dinoland update would likely include new guest pathways in this area allowing for better flow. This would mean a new entrance for the Theater in the Wild, which currently houses the Finding Nemo: The Musical show. The new walkway and a new show replacing Rivers of Light will likely open in time for the 50th Anniversary.

Few details on what will replace Dino-Rama. One rumor is Disney taking the entire DinoLand area and retheming it to South America with the Dinosaur ride being reskinned as Indiana Jones, a popular ride at Disneyland and Tokyo DisneySea, that uses the exact track layout and ride vehicles as Dinosaur. SeaWorld is currently constructing a new South American themed area that will house a family river raft ride and some of the first land mammals ever displayed at the park.

There are other expansion plots at , including a massive one Asia. While difficult to reach this new expansion plot is rather large and could easily hold one or two new lands. This area is long been rumored for an Australia themed expansion that may include moving The Living Seas aquarium from Epcot and a heavy tie-in to The Rescuers 2 film. The Rescuers are back in vogue after sales of their merchandise became the hot item at Tokyo Disney earlier this year. Disney is now rumored to be looking at rolling out Rescuers merchandise stateside in the coming years. Early rumors also pointed to a dolphin and orca show, though these days it’s safe to assume Disney won’t be adding any killer whales to its parks.

Next to the expansion plot is Rafiki’s Planet Watch. This educational pavilion gives guests a behind-the-scenes look at veterinary care facilities and has a small petting zoo. Jim Hill, a Disney historian and industry insider, has long been pointing to this area as a possible location for a new Zootopia-themed land. Zootopia, which made over a billion dollars at the box office, already has a small presence in the parks but nothing permeant. Little is known on what this new area may include, but some rumors point to a themed train ride, similar to the one from the films, a family dark ride, and highly themed meet-and-greet experiences.

Currently, Dino-Rama in Dinoland serves as the family anchor of the park. With Dino Rama going the way of the dinosaurs, the new Zootopia area would serve as that much-needed family area of the park, at least until something new opens in Dinoland.

It’s clear that leading into 2021 the majority of the focus at Disney World will be the other three parks, but Disney looks to have learned its lesson with not adding anything for years to a park. It now sounds like they’re lining up to have numerous expansions throughout the 2020s and going forward.