Just this morning, the New York Times obtained a draft of the 2017 U.S. Global Change Research Program's Climate Science Special Report, and it's as bleak as you can imagine.

For example, in just the last 30 years, the global average temperature has increased by more than 1.2 degrees Fahrenheit. The cause? Humans. The report states that we humans are responsible for 92 to 123 percent of the rise in temperature between 1951-2010.

The 669-page report states that cold waves are dropping and the frequency of heat waves have dramatically increased. "Recent droughts and associated heat waves have reached record intensity in some regions of the United States," the report says.

This also means that our oceans are getting warmer. According to the report, oceans have been absorbing excess heat from greenhouse gas warming since the mid-20th century.

So, the timing of today's planned update to the 2017 hurricane forecast from the National Oceanic and Atmospheric Administration seems almost poetic, especially since they're now saying it's very likely to be "the most active since 2010."

Trump reportedly wants to slash NOAA's hurricane-tracking satellite funding
By Deanna Ferrante
Blogs
NOAA forecasters updated their previous outlook from last May (which had a 45 percent chance of an above-average outlook), and are now saying this season will likely have 14 to 19 named storms and two to five major hurricanes. 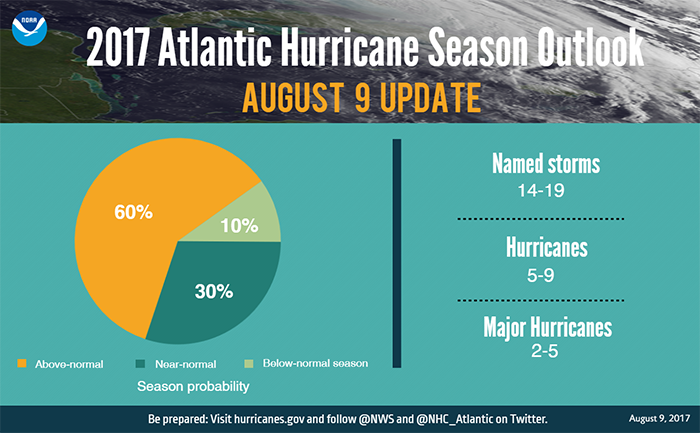 "We’re now entering the peak of the season when the bulk of the storms usually form,” said Gerry Bell, Ph.D., lead seasonal hurricane forecaster at NOAA’s Climate Prediction Center. "The wind and air patterns in the area of the tropical Atlantic and Caribbean where many storms develop are very conducive to an above-normal season. This is in part because the chance of an El Niño forming, which tends to prevent storms from strengthening, has dropped significantly from May."

Florida's hurricane season arrives after 2016 wakeup call
By Lloyd Dunkelberger and Tom Urban, News Service of Florida
Blogs
Bell also stated that an above-normal season is likely because of warmer waters across the tropical Atlantic.