Artichokes may grow in Florida after all, discovers UF scientist 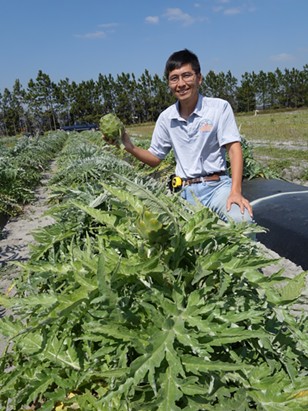 Start melting the butter, locavores: A University of Florida scientist says he's found an artichoke strain that can grow in hot, humid Florida.

Almost all artichokes grown in the United States are grown in California's also hot but fairly dry climate. We also import fresh artichokes, mostly from Mexico. All of which means, if you are trying to lower your carbon footprint by eating foods grown nearby rather than trucked or flown in, you're outta luck if you want a nice roasted 'choke.

But that may change thanks to horticultural scientist Shinsuke Agehara, who has discovered that with the addition of a certain plant hormone, there is a cultivar that can thrive in our subtropical climate. According to UF:

Shinsuke Agehara, a University of Florida assistant professor of horticultural sciences, presented his preliminary findings to the Florida State Horticultural Society. In his talk, he said that the 'Imperial Artichoke' shows the most promise of growing in Florida's warm, humid climate. Growers will need to use a natural plant hormone called gibberellic acid to maximize growth.