Theater review: 'Joyce Jackson's Guide to Dating' at the Abbey 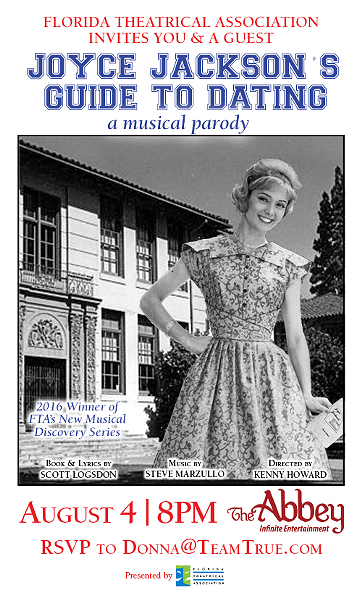 If today’s Tinder-tainted times make you pine for the simpler dating scene of 60 years ago, Joyce Jackson’s Guide to Dating is ready to remind you that the Eisenhower era wasn’t all that awesome either. Scott Logsdon and Steve Marzullo’s show, which is making its debut at the Abbey as the winner of Florida Theatrical Association's first New Musical Discovery Series, stars Alexa Nielen as Joyce Jackson, the queen bee of the Class of 1958. Joyce has a handsome boyfriend, Mix (Bobby Hogan), whom she never allows past first base, and a gaggle of gal-pals representing all the traditional high school stereotypes: shy Nancy (Eva Gluck), awkward Frieda (Amelia Bryant), ditzy Betty (Jenna Coleman) and slutty Louise (Marissa Ann Volpe). But when Joyce becomes obsessed with writing a book advising fellow teens about proper courtship, she winds up running roughshod over her friends’ feelings.

Joyce Jackson’s Guide to Dating bills itself as a “musical parody,” but it comes up short on both accounts. The fine cast coaxes some tight vocal harmonies out of the score, but even if they weren’t struggling against the Abbey’s uneven sound amplification, most of Marzullo’s cookie-cutter melodies and Logsdon’s innuendo-laden lyrics don’t leave a lingering impression. More importantly, Logsdon’s book doesn’t seem to know whether it wants us to laugh with the characters or at them; I ended up occasionally chuckling softly to myself. There’s nothing in the plot that hasn’t been seen in a hundred after-school specials, and the caricatured characters aren’t complex enough for viewers to become emotionally invested in their fates. Yet, the satirical swipes at mid-century mores are so milquetoast, even Grease is more incisive in its indictment of the age.

Technical designers Bonnie Sprung, Michael Wanzie, Roy Brown and Kyla Swanberg make Joyce Jackson visually appealing if nothing else, with an eye-popping palette of mid-century colors, and director Kenny Howard keeps the parade marching along with as much pace and energy as the Abbey’s small stage can bear. All of the performers are competent, and a few – especially the superbly spastic Bryant and Ricky Cona as nebbishy Ted – really make the most of their underdeveloped roles. But despite the cast and crew’s best efforts, you’ll likely decide long before the perfunctory ending to ditch Joyce’s Guide, and get back on those dating apps.