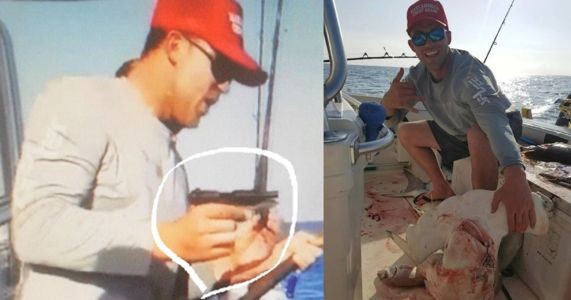 A new petition is urging MTV to drop Siesta Key cast member Alex Kompothecras, after a recent video appears to show him firing a couple of shots into the gills of a hammerhead shark from the side of a boat.

"MTV has a long history of glorifying the lifestyles of the rich and famous without much consideration for whether the people they make famous have any sort of moral compass," says the petition, which was created by Care2Activists. "This behavior cannot be condoned or tolerated, even if the perpetrator is rich and famous."

In the video a man can be seen wearing a grey shirt and a "Make America Great Again" hat, the same outfit Kompothecras is seen wearing in a now deleted photo posted to his own Instagram account.

The deleted Instagram posts from the cast of MTV's 'Siesta Key' are somehow worse than the show
By Colin Wolf
Blogs
"Hammerhead sharks are endangered, and their population has declined 80 percent. It's sick to watch Kompothecras smiling gleefully as the helpless animal struggles and dies," continues the petition.

It was also recently discovered that Kompothecras is friends with Matt Wenzel, of the now viral shark-dragging video. There's even a post where he can be seen on the same fishing boat as Wenzel.

The show is produced by Kompothecras' father, the wealthy chiropractor behind those "1-800-Ask-Gary" commercials, Dr. Gary Kompothecras, reports the Tampa Bay Times.

"My dad had some buddies come to town, and I took them out fishing," Alex said to the Times. "They thought our lifestyle was pretty unique. I kept hearing, 'You need to do a show.' Then my dad called a small production company to help do the pilot."